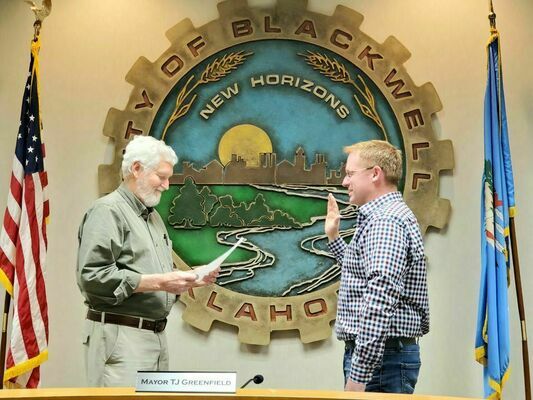 Blackwell citizens took to the polls April 6 to elect a new mayor for the City of Blackwell and to elect a City Council member for the Ward 4 seat.

Greenfield previously served on the Council and was mayor until 2020. He lost his reelection campaign to political newcomer Glenn Cox, who served for a few months before stepping down.

“I never stopped working,” Greenfield said shortly before the election. “I spend a lot of my time keeping up with the local government, doing a lot of research. I’ve remained committed to the people of Blackwell, and that’s something that will never leave me.”

Julie Green, who served as a Ward 4 Council member and ran for mayor, said she put her pride in Blackwell and her confidence in the community to use.

Marquardt served for four years on the Council and ran on a platform of “fighting corruption” in Blackwell. Shepherd has worked at Kay Electric for 25 years.

Greenfield and Shepherd were sworn into office Monday by Councilman Jon Webb. Husted was sworn in April 7, also by Webb.