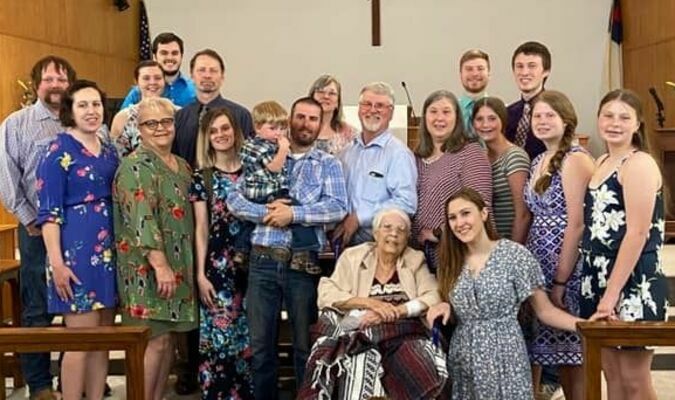 When Jesus died on the cross, He knew He was dying so Gloria Simunek could have life. He knew everything about her. Jesus knew Gloria would find love in Rudy Simunek and raise children on a farm in Kay County, Oklahoma, the Christian Bible tells us.

Jesus knew Gloria would have a beautiful head of hair – hair she once colored purple, pink, green and blue just to get a rise out of her granddaughters.

He knew she’d have a wide smile, a contagious laugh and an unrelenting sense of wit. Jesus also knew Gloria would one day become ill, fighting cancer and losing her ability to walk. He knew she’d endure pain. Yet Jesus also knew that, on Easter Sunday, Gloria’s final wish would be granted.

On a day when Christians around the world join together to celebrate the resurrection of Jesus Christ, Simunek’s entire family joined her in church – maybe for the last time. “Only by the Grace of God!!” her daughter, Shelli Jacobs, wrote in a Facebook post. “Mom’s request was to get her entire family to Easter service with her … and we made it happen.”

In recent months, the 74-year-old’s health has declined. She’s said “Goodbye” to many of her closest friends and family members. But she told them all that she wanted to live through Easter. And she did. On April 4, several generations of the Simunek family filled the pews at the Braman Methodist Church.

In total, 22 members of the family were there. Thanks to help of family friends, Gloria’s family got a handicap-accessible van for her to ride to the service in. When the family arrived, members of the congregation stood outside, cheering and clapping for Gloria.

“I was just in awe at Grandma’s smile and that it was all pulling together perfectly,” daughter-in-law Debbie Simunek said. Gloria was perched in her wheelchair, much like a mother bird watching over her young ones, as her family helped move her into the sanctuary.

This is not the kind of condition Gloria is used to being in. She’s lived most of her life on the farm, raising crops and kids at the same time. She’s engaged in countless civic affairs. The fair board, for example, where she helps set up agricultural exhibits and crafts. Just one year ago, she was still helping her son, Stacy Simunek, move farm equipment from field to field during harvest. She’s spent her life on the same plot of land.

Three houses have been built upon it through the years. But she was rarely at home anyway.

“She’s always on the road going somewhere, doing something,” Stacy said. Even in failing health, she hasn’t lost her kindred spirit, her family says. “All of her hospital portals even describe her as a very pleasant 74-year-old female,” Debbie said. Nor has she lost her faith. “She’s probably got stronger faith through this battle than anyone I’ve ever seen,” Debbie said.

“To have the faith that it was in the Lord’s hands and keep her upbeat personality without getting depressed – she has been a mentor to many watching her through this journey.” Nor has she lost her sense of fashion – her love of being a “snappy” dresser, her family said.

Gloria wore a light tan blouse and carried a red and white lap blanket to the service. The morning sun’s golden beams seemed to shine down from the heavens upon her. Across the church door’s threshold, sunlight poured in through stained-glass windows, imbued with saturated tones of red, green and blue. And purple and pink, too. It was a colorful setting for a colorful character.

In church that day, the family heard the story of how Jesus was nailed to a cross to wipe away the sin of mankind. The sin of which all are guilty, Christians believe. Even Gloria, the sweet, endearing, white-haired, elegant matriarch of the family.

That’s why she was going to church “come hell or high water,” she told Shelli. The sermon she heard is forever memorialized in a Facebook video. “Jesus Christ is risen!” pastor Daniel Gibbens-Rickman called out. “He is risen indeed,” the family replied in unison.

The congregation started the service in song. The first tune was “Alive, Alive.” Then, the pastor gave his message. He talked about death. “The Bible teaches that all of us, all of our days, wrestle with the reality of death in ourselves,” he said. “Death has infected every aspect of our lives.”

And so it has for the Simunek family, caring for and spending time with their beloved Gloria at her home in recent weeks. “We did it to honor her because of everything she’s done for us,” Shelli said. “She did enough of it for us growing up. … Even though we are all in this together, we absolutely could not do it without Debbie. She has been with Mom 24/7 and has made this all possible. She is a saint in my book.”

“It was just a promise kept,” Stacy said. “She was told she’d never go anywhere but here.” Like the sermon they heard that Sunday, perhaps the Simuneks’ minds have been filled with the thought of loss. “But along came Jesus,” the pastor said.

“In Jesus, there is victory over sin and death,” the pastor said.

“We can live every day filled with His spirit, alive in Him, defeating sin and darkness and death.” The Simuneks said coming together and taking Gloria to church on Easter Sunday was perfect. They were honored to bring her back to church in what they say may be her final days. But really, they won’t be. For a woman who was always driving, the next destination is an eternity in heaven.

Why are there so many stories of harvest in the...