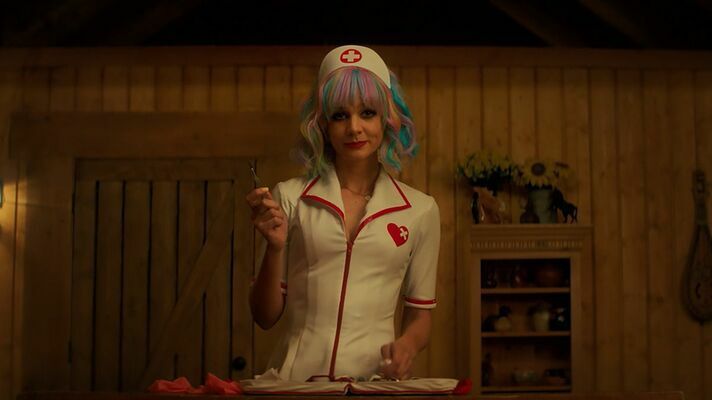 “It's every man's worst nightmare, getting accused of something like that.”

“Can you guess what every woman's worst nightmare is?”

Nominated for 5 Oscars and 4 Golden Globes, Emerald Fennell’s PROMISING YOUNG WOMAN is an at time hilarious, often poignant, and thoroughly disturbing black comedy about a vigilante seeking to do her friend- a date rape victim- justice.

The film opens with Carey Mulligan as Cassandra in some upper-end club where she is slumping over, blackout drunk, letting her long legs hang open to give passer-by’s a glimpse up her skirt. Out with his friends, Jerry (Adam Brody) offers to take this drunk girl and get her home safe. Of course, on the way home in the back of his ride-share, he thinks maybe she’d be an easy lay.

It turns out, she isn’t. Not by a long-shot. Cassie goes to bars, pretends to be heavily intoxicated, and lets men lure her to their apartments before she reveals she’s stone-cold sober and looking to teach any predator a lesson. And that’s just in the opening few minutes of PROMISING YOUNG WOMAN.

Cassie returns home the next morning, unwraps her worn journal held together by a scrunchie, and marks off another row of multicolored tally marks. She’s been doing this for a while...and we’re now along for the ride. Everything is fine until she meets an old college friend (and newfound lover) in pediatrician Ryan (a fantastic Bo Burnham) and her lipstick vigilantism gets a hell of a lot more complicated.

Written and directed by Emerald Fennell in her directorial debut, you’d get the impression this is itself another tally mark in a well-versed filmmaker. It’s astounding. Her mastery of snappy dialogue, nail-biting tension, and societal satire is done with (relatively hiccup-free, but not perfect) ease.

Mulligan is no stranger to multilayered roles, whether it’s breaking hearts as Daisy Buchanan in 2013’s THE GREAT GATSBY or playing the (implied sexually abused) sister of a sex-addict in 2011’s SHAME, and the praise heaped upon her for her role as Cassandra is absolutely deserved. She is cold and calculated, and very briefly we see glimpses of...maybe compassion? Maybe doubt? As she does what she does.

Her scrunched lips and sad eyes do wonders for her character, and by the time she arrives to wreak havoc at a bachelor party in ruby red heels, a tight and skimpy nurses costume, and rainbow-pastel hair all set to a chilling horror-movie reinterpretation of Britney Spears’ “Toxic”, you see that she’s on a similar coin as movie monsters like Patrick Bateman or Norman Bates.

PROMISING YOUNG WOMAN is absolutely gripping, and the content of the film is made even more unsettling by how very real it is. A product of the post #MeToo era, Fennell’s film gives us plenty of “nice guys” and wretches the gut at how this all is happening at bars and clubs across the nation, across the world.

This is as much a film about rape as it is about vengeance, and while the film makes no qualms about the former (rightly) it does raise some questions about the latter. In the same thought that you might wonder, ‘is she doing the right thing’? You snap and go ‘yes, she is’.

PROMISING YOUNG WOMAN of course demonizes rapists and rape-enablers, but Fennell does navigate some very delicate waters in showing how guilt can compound and break people in the form of a lawyer played by a knockout Alfred Molina, who helped several “proud rich boy” rapists get off scott-free. It is in this character that, perhaps, gives Cassandra some hope. Men can be evil, but maybe men can change. It isn’t just the men though, this is no one-sided uber feminist call to action. The film emphasizes that women can be just as complicit in victim-blaming as anyone else...maybe even moreso.

The film’s message goes out to all ages and genders, and it is a movie that is both timely and timeless.

PROMISING YOUNG WOMAN is available to rent or buy on DVD and Bluray as well as iTunes and Amazon Prime.