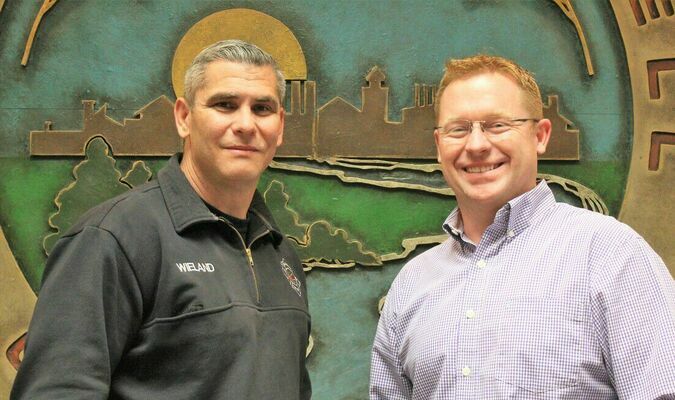 The night began with a workshop at 5 p.m. to discuss various concerns about the City of Blackwell’s budgetary standings in the face of several large projects, which were discussed at the previous City Council meeting.

The city council was called to order where Mayor T.J. Greenfield read three proclamations recognizing April 11 17 as National Public Safety Telecommunications Week to honor Blackwell’s 9-11 dispatchers; declaring April as Child Abuse Prevention month, and declaring April as National Safe Digging Month. Blackwell Chief of Police Dewayne Wood brought two of his dispatchers up to recognize them and noted that all of Blackwell’s Police and Fire dispatchers were vital in saving lives throughout the city.

The council then voted in Jon Webb as vice mayor. The council then approved a contract for approximately $122,000 for HVAC work on the livestock pavilion with YoungerHolmes Electric for inner and outer fans, heaters, and other work to make the pavilion more sustainable and versatile through cold and warm weather. Greenfield noted that this work was necessary to sustain the increased, heavy usage from the Pavilion with various shows and events.

A discussion with Guernsey Engineering on the 13th Street and Ferguson Ave Reconstruction Project and the Ferguson Widening & Sidewalk Project for Blackwell Elementary was next up. The Council agreed that they hoped to see a Ferguson sidewalk with an option for adding turning lanes. Guernsey agreed that he would assemble an itemized list and bring it to the next Council meeting for direction from the Council on finally starting the project.

The discussion of also applying for an ODOT grant for more sidewalks was discussed and will be worked on for the fall grant cycle. Phil Briggs from Cowan Engineering spoke at length to the Council on priority waterline projects.

Briggs told the council he will be bringing back further information on the extensive project. Cowan is currently working on a sewer project for the city. The Municipal Finance Service group who also was at the work session earlier in the evening addressed the issue of indebtedness on several projects.

The city currently has a two-million-dollar annual payment on loans in the neighborhood of $17 million dollars. Jon Wolfe advised the council that he would come back with some alternatives at the next meeting. The council would like to work on a new wastewater treatment plant but the $11 million price tag with the current debt and an engineering cost of approximately $500,000 needs to be looked at. A low-interest loan from the Water Resources Board was discussed, but Wolfe said he would get more information. The loan rate currently is around two percent.