Review: FALCON AND THE WINTER SOLDIER is fast and loose 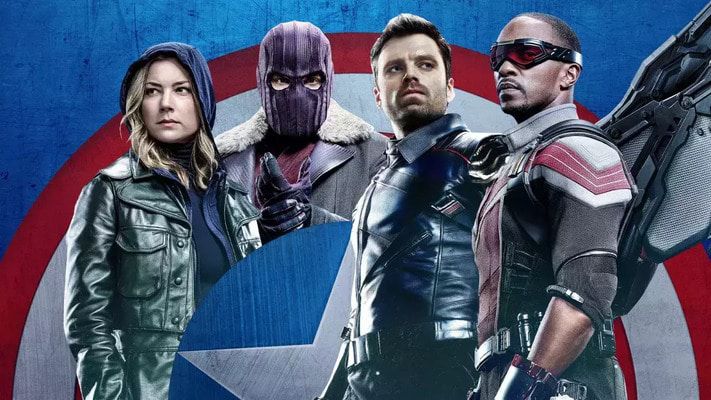 “Only an American would assume a fashion-forward black man looks like a pimp.”

Disney+’s FALCON AND THE WINTER SOLDIER (I’ll abbreviate here as FATWS) wrapped up it’s 6-episode run this past weekend, and I spent one long night watching the entire series from start to finish which wears both thin and thick in typical MCU fashion.

Set in the months following 2019’s AVENGERS: ENDGAME, FATWS follows Bucky Barnes (Sebastian Stan) a reformed assassin by the code-name The Winter Soldier as he attempts to settle down and put his grizzly past behind him. At the same time, Sam Wilson (Anthony Mackie) aka The Falcon is attempting his own brand of a quit life as he returns to his sea-side Louisiana home to care for his family’s boat alongside his widowed sister and her two children.

Of course, retirement ain’t ever permanent. A militant extremist group known as the Flag Smashers is attempting to destabilize the Global Reparation Council (GRC) a U.N-like organization that aimed to help and shelter those who were displaced following the “Thanos Snap” or “The Blip” that erased half of life on Earth for a number of years before the population was snapped back into existence, causing the rest of the world to have to readjust suddenly and drastically.

With all this, the U.S. Government has decided America needs a Captain America again, and they unveil U.S. Army veteran John Walker (Wyatt Russell) as the new Captain America to battle these global terrorists and to give people hope again. Realizing that this new Captain doesn’t know the half of it, Sam and Bucky form a reluctant alliance to track down the Flag Smashers...and to do that, they have to form an uneasy alliance with the nefarious Baron Zemo (Daniel Bruhl) if they have any hope of saving the day.

FATWS promises a LETHAL WEAPON-esque buddycop adventure and delivers on that in spurts, but is more interested in the politics of super-heroics, a job that is often left to Marvel’s cinematic rival DC with much better results. But I do, at least, admire the effort. There’s a lot going on here about open borders and U.S. race relations. Neither are handled well enough to justify the time spent on them, but one thing the series nails is Sam Wilson’s relationship with a Korean War-era black super soldier and his disdain for the title of Captain America.

This relationship plays out not quite how one would expect, making the “big moment” In the finale very satisfying and deserved. It’s not about Sam becoming the “Black Captain America”. It’s about him becoming “Captain America”. A paragon of good. A symbol of hope, no matter your race.

At the same time, we get a surprisingly dark and nuanced turn from Kurt Russell and Goldie Hawn’s son Wyatt Russell as John Walker, who gives a scathing look into the sacrifices our soldiers make, the expectations put on them, and the hypocrisy of Washington D.C.’s military men who collect medals while widows and mothers collect trifold flags at funerals.

FATWS relies heavily on Bucky and Sam’s dynamic, which was the best part of 2016’s gruelingly terribly CIVIL WAR, alongside another gem from that dull film, Baron Zemo. Zemo believes that super groups, especially The Avengers, are a danger if left unchecked. Enhanced beings playing judge, jury, and executioner with world affairs. It is Bruhl’s nuanced turn as Zemo which gives FATWS some unexpected but deserved depth, especially when he atones for his past with Bucky.

Zemo, Bucky, and Sam gave great rapport with each other, which leads to some laugh-out-loud hilarity with the three when they travel to the cyberpunk den of depravity that is Madripoor.

FATWS is worth a watch for the core characters of Sam, Bucky, John Walker, and Baron Zemo and sets up a nice Season 2 if these characters all return. One definite pro of the series is the fact in doesn’t spend 6 hours just talking about “other Marvel stuff”, which shows the films with the least connection to the greater-MCU are all the better for it.

All six episodes of FALCON AND THE WINTER SOLDIER are available to stream on Disney+.