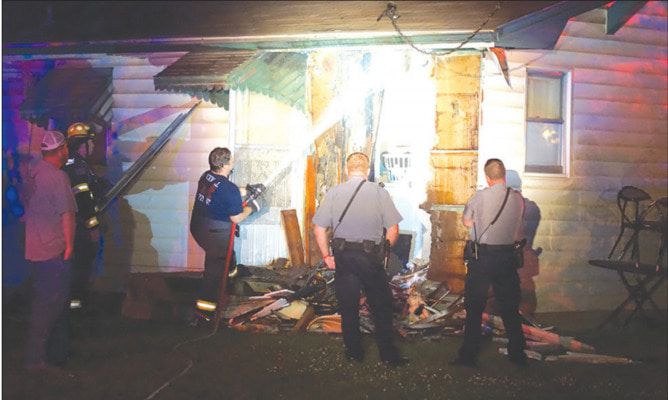 Maybe she was feeling tired when Blackwell firefighters burst into her bedroom late Sunday night. Or maybe her mind was racing, waiting anxiously to be saved as part of her home burned. Or maybe she was getting ready to give herself a bath – but not one in a bathtub, of course.

Or maybe she was thinking about what she wanted to eat next. A bird? A mouse? No one knows what was going through the mind of Little Bits, a calico cat, when she was removed from her home late Sunday night.

Thanks to firefighters and her neighbors, she’s doing all right now. Firefighters rescued the feline, who is about a year and a half old, when part of her owner’s home at 1702 B St. caught fire shortly before midnight.

Blackwell Fire Chief Cory Hanebrink said he suspected an electrical problem was the cause of the late night blaze, which occurred in the northeast corner of the home. Most of the home was untouched by flames. Neighbors told The Journal-Tribune power had been out in part of the neighborhood earlier in the day, and around 7 p.m., they heard a popping sound coming from the home.

“It’s been burning for a while – several hours, anyway,” Hanebrink said shortly before midnight.

Neighbor Mark Brewer was one of the first to see the flames. He rushed across the street and into the backyard of the home, where he fought the fire using a garden hose. “It was right there on the porch,” he said. “I just had to get it off, hook it up and spray.”

Brewer hosed down the house until firefighters arrived. He said the fire “wasn’t bad, it was just flames on the side.”

When asked what motivated him to brave the blaze, he simply replied, “It’s just a neighbor’s house.”

“He’s a hero,” fellow neighbor Karen Merhoff said of Brewer. No humans were in the home at the time of the fire, neighbors told firefighters, as the single woman who owns the home was out of town. But the home’s long haired live-in was inside, neighbors said.

So, Hanebrink sent two firefighters inside the home to search for the cat, and they found her in the back bedroom. They brought the cat out and took her across the street to the home of another neighbor, who was house-sitting for the absent homeowner.

Hanebrink said the cat was unharmed. After firefighters took Little Bits across the street, she was nowhere to be seen. She was hiding in the bushes of that neighbor’s home, said the neighbor, who asked not to be identified. That kind of behavior is characteristic of the kitty, whom neighbors say frequently roams the block.

She’s lived there for most of her short life – the better part of her life, any- way, and in every sense of the phrase.

When Little Bits was a kitten, some neighbors found her at a junkyard. They took her in for a while. When they moved to California, they let her go. But she soon found a new home at 1702 B St., neighbors said. Until her owner returns, Little Bits will live in the garage across the street.

Or maybe she won’t. She seems to like the bushes.