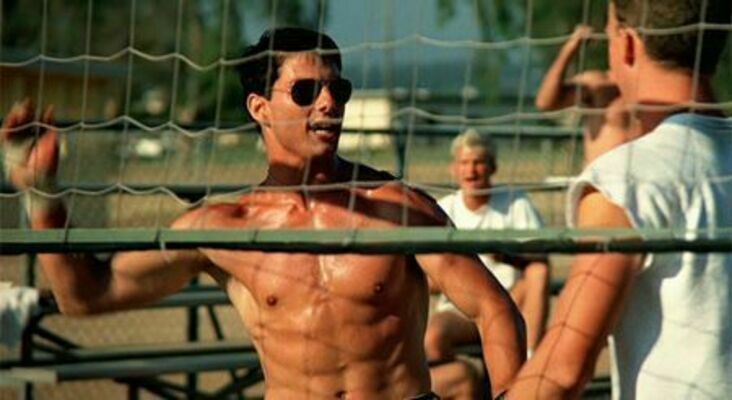 Most of, if not all, of your favorite movies are directed by LGBTQ directors.

Think on some “LGBTQ” films. Sure, the obvious ones come to mind. Luca Guadagnino’s haunting and heartbreaking 2017 masterpiece CALL ME BY YOUR NAME, for one. Or the controversial Ang Lee Oscar-winner BROKEBACK MOUNTAIN. Those are obvious.

What about TOP GUN? Yeah, that one. Where openly gay director Tony Scott filmed sweaty and hard-bodied Tom Cruise and Val Kilmer getting within kissing distance to smack-talk each-other or to play a round of homoerotic beach volleyball set to Kenny Loggins’ aptly named “Playing with the Boys”.

TOP GUN is a stellar piece of 1980’s art, and it is also an amazing film with a kickin’ soundtrack, great and memorable characters, and some of the most cutting-edge visual effects of it’s time. Was it really a “gay” movie? No. Maybe.

But while we’re on the subject of Tony Scott, let us examine how some of the best films of all time- or some of the most iconic- have been directed by gay men. Let’s take a look at some of the Hollywood greats that prove talent can- and does- come from all walks of life.

THE PATRIOT. The Mel Gibson Revolutionary war epic that lit cinemas on fire in the early 2000’s. INDEPENDENCE DAY. The Will Smith alien invasion blockbuster that has become a July 4 staple of many households across the globe. STARGATE. An iconic and influential science-fiction thriller that continued Kurt Russell’s rugged leading man reign.

These films are were directed by Roland Emmerich, who recently returned to big-budget filmmaking with 2019’s earnest WW2 actioner MIDWAY. Emmerich is a huge LGBTQ+ proponent, and is openly gay. He is, essentially, a founding father of the American blockbuster as we know it.

The late Tony Scott burst onto the scene with the aforementioned 1986 TOP GUN before flexing his blockbuster muscle again with the Tom Cruise racing film DAYS OF THUNDER. He got a bit darker, and his films began to reflect the shift from fun 1980s and early 90’s into grittier thrillers such as THE LAST BOY SCOUT, a fantastic film with a genre-best Bruce Willis. After that, he directed Quentin Tarantino’s TRUE ROMANCE, a beautiful caper that oozed cool and attitude as only Tarantino could accomplish.

Scott’s magnum opus came with his muse Denzel Washington, much as his brother Ridley had used the actor for one of his best films ever (AMERICAN GANGSTER) Scott put Denzel to the test as an alcoholic, suicidal bodyguard given one more chance at redemption in 2004’s MAN ON FIRE.

One of my favorite directors, the late Joel Schumacher, is perhaps one of the all-time Hollywood greats. His being gay was an open Hollywood secret, and the director very famously opposed labels, as you can read in a beautifully touching obituary piece penned by Matthew Hays of Advocate.com titled “Joel Schumacher: Reluctant and Conflicted Gay Trailblazer”

Schumacher is responsible for almost every movie that you ever went “wow, that was stylish”

While perhaps infamously known for his back-to-back BATMAN FOREVER and BATMAN & ROBIN, Schumacher was brutally dragged for flipping the script on Tim Burton’s dark and then darker BATMAN and BATMAN RETURNS by turning the Gothic vigilante into a neon drenched wise-cracker operating in a city built of towering art deco statues, dressed to the nines in leather and nipple-adorned armor.

Schumacher, however, is much more than Batman. The world owes him immensely for films like ST. ELMO’S FIRE and 1987’s landmark horror film THE LOST BOYS, which effectively made vampires “cool”...and had enough overtly gay overtones to suck your blood dry.

Schumacher wouldn’t stop there, however. The 80’s and 90’s took him to direct the grizzly thriller FLATLINERS along with 1993’s vigilante satire FALLING DOWN.

After the Batman films in ‘95 and ‘97 respectively, Schumacher went back to where he started with pictures like 8MM and PHONE BOOTH before a sharp 180 saw him bring the extravagant musical sensation THE PHANTOM OF THE OPERA to life in 2004 starring Gerard Butler (pre-300 fame)

His last major release was 2007’s critically panned detective film THE NUMBER 23, starring an especially serious Jim Carrey as audiences had seldom seen, allowing the auteur to reteam with his BATMAN FOREVER Riddler.