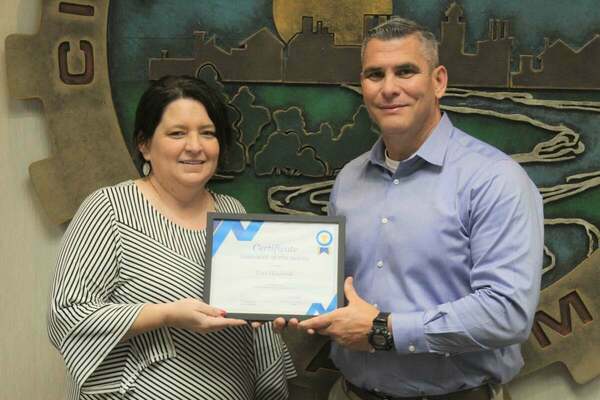 The Blackwell City Council met Thursday to discuss several items, including the promotion of Jerry Wieland to the city manager’s position. The meeting began with the recognition of Traci Hanebrink, city clerk and human resources director, as Employee of the Month.

She received a round of applause from those in attendance. “She’s the brain of the operation and the glue that holds us together,” Wieland said. “I promise, if you work for the city or you sit here with the Council, this lady has helped you exponentially in one way or another.” Hanebrink has been with the City of Blackwell since 2013.

City department officials gave reports to the Council. Anderson said his crews have been busy working on the Blackwell Memorial Pool, which opened Memorial Day weekend. Mayor T.J. Greenfield told Anderson that he and the Council appreciate the hard work that went into readying the pool, and he said he has heard citizens complement the department.

Wood said the police department is expecting three new officers, and he hopes to introduce them to the community soon. Wood said the department has had nearly 3,500 calls for service and 1,270 9-1-1 calls to date this year. Blackwell Fire Chief Cory Hanebrink told the Council that he had taken part in debris and flood hazard courses offered by the Federal Emergency Management Administration. He said that, the next time another natural disaster happens, Blackwell would be “ready” to handle it.

Head Librarian Lisa Vargas said the library’s checkout numbers are up heading into the summer. She said citizens saved more than $10,000 by using the library’s resources, including free Wi-Fi, mobile hotspots, books and movies. Top of Oklahoma Museum Director Melissa Hudson said several museum exhibits are being rearranged thanks to assistance from a curator with Oklahoma State University. After hearing reports, the Council voted for the city to absorb a 2% cost increase from Davis Sanitation for waste management so that it would not impact citizens. The Council also voted to amend the city’s personnel manual addressing nepotism.

The new changes would allow spouses and children to work in the same department under certain conditions.

The Council also approved eight easements to be transferred to the Blackwell Municipal Authority for sanitary sewer purposes. Just before 7 p.m., the Council convened into executive session to discuss the employment of Wieland as city manager.

Wieland was named interim city manager after the Council voted to fire former city manager Janet Smith in April. After several hours of discussion, the Council returned to open session and voted to give Wieland the job. Greenfield gave Wieland praise and said Wieland asked for no contract or severance package.

Wieland thanked the Council, city employees and citizens. “It is a true honor to be given the opportunity to be your city manager,” Wieland said. “I greatly appreciate the faith that the City Council has put in me for this position. City employees, thank you all for the support. I truly believe we are family and vow to give you my all. “Citizens of Blackwell, all the support from the community has been overwhelming, and I cannot thank you all enough. I promise to perform this job with honor, courage, and commitment. Leadership is a responsibility to do more, not an excuse to do less. We are Blackwell.”