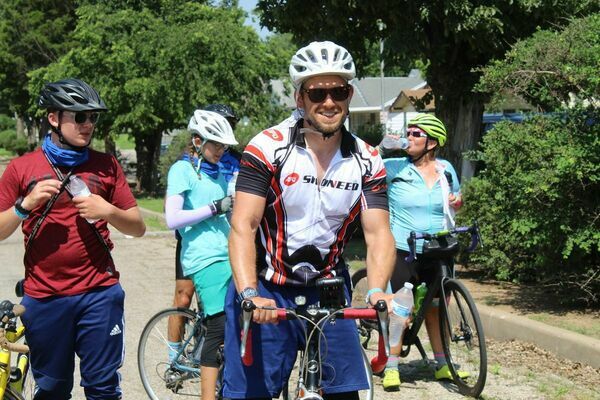 Members of the Oklahoma Freewheel 2021 Tour came through Blackwell on June 11 for the last stop on the way to their final destination in Arkansas City, Kansas. More than 300 riders began their journey in Vernon, Texas, on June 5 before traveling into the Sooner State.

They stopped in Frederick, Medicine Park, Hinton, Kingfisher, Perry and Blackwell before putting Oklahoma in their rear-view mirrors. They ended their “Viva La Oklahoma” adventure in Ark City.  Oklahoma Freewheel began in the 1970s, making this the 42nd year of the cross-state trek.

The route changes each year, but it typically begins near the Red River, Oklahoma’s southern border with Texas, and travels north.

Blackwell was chosen as a host city for the tour in 2020, but the COVID-19 pandemic postponed the event.  Riders began pouring in as early as 6 a.m. Friday morning, with Blackwell Youth Center Director Denise Hindman there to accommodate them.

Hindman opened the youth center to the riders as a place to cool down, sit, rest and eat. The teenage workers who help her run the youth center’s concession stand prepared walking tacos, pulled pork sandwiches and more for the hungry riders. They also provided drinks such as coffee, soda and water.

“We made a profit, absolutely,” Hindman said. “It was huge for our youth center. We raised money I don’t think we could have otherwise, and we thank the City of Blackwell for involving us.”

Also on-site to accommodate the riders were members of the Blackwell House of Prayer, who hosted a bake sale. They offered cookies, banana bread, rice treats and more. They sold out shortly after noon. In the park, Kay County 4-H members had their own booth to raise money for their organization. Tonkawa club leader Melissa Miller and 4-H educator Liz Nicholson served “Colton Tripp’s famous cinnamon rolls” as well as hot dogs and other snacks.

Nicholson said 4-H did well during the freewheel tour. Both Miller and Nicholson thanked the City of Blackwell for coordinating with them.

Representatives from Blackwell Tourism included George Becker and Deon Gates. They handed ice-cold water bottles to the riders and greeted them.

Through the week, Spence and others from the City of Blackwell worked with several local businesses, including United, Walmart, Los Potros, Casey’s General Store, O’Reilly’s Auto Parts, Shepherd’s and Valero. All donated cases of water. After the event, the remaining cases were donated to the youth center by the city.

“Working with Talyn Spence the past few months on this project has been a blessing,” he said. “I couldn’t have asked for this to come together any better than it has. The food vendors, the water, the park, the youth center ... the City of Blackwell has gone above and beyond to welcome us. I don’t think we could ask to be treated any better.”

The First Christian Church offered its youth barn to the riders for shelter, as well as its showers and bathroom facilities.

Throughout the day, members of the Blackwell Tourism organization, the City of Blackwell and the First Christian Church offered shuttle services to the riders.

On Friday night, Dave Corn and his bluegrass band played for the riders. On Saturday morning, the bikers departed with stomachs full of breakfast from Blackwell’s United Outreach.