Happy Father's Day to Phil Green- Saving others and "udders" 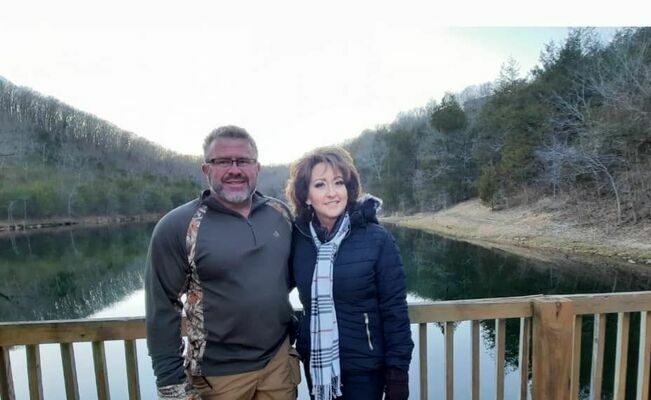 Even fewer people are called to save both.

But I know someone who saves others – and udders.

Phil Green is an award-winning medical professional and the owner of his own business, Green’s Country Clinic. He served honorably on our school board for a number of years, has supported countless community efforts and has maintained an active role in our church.

But enough with all of that. He’s my dad. He’s not some figurehead or manager or businessman. He’s a human – a remarkable human – who is devoted to caring for and preserving life.

No matter how humane or bovine it may be.

On a day in late May, my family and I drove to Barnsdall, about an hour and a half southeast of Blackwell, to buy some cattle. My mom loves them, and they love her, too.

Rain fell and clouds filled the skies as we trekked toward a ranch where some miniature Hereford cattle waited for us – and, much to our surprise, a momma cow who was struggling to give birth to her baby.

When we walked into a dimly lit barn at the ranch, we didn’t see the cow gasping for air and heaving with all her might as she lied on the floor in a corner. Her owner saw her and panicked. The cow couldn’t deliver the calf on her own. The calf was too big, the cow was too weak, and both were running too low on oxygen.

Without help, the calf wouldn’t survive. The mother might not make it, either. But where was help to be found? The owner was physically unable to pull the calf. His friends weren’t answering their phones. And no veterinarians in the area will visit local ranches to lend a helping – or life-saving – hand.

Luckily, one physician’s assistant happened to have two hands ready, able and willing to help.

After a considerable amount of coaxing, the momma cow walked, pain-stricken, into a squeeze chute. This helps stabilize her and keep her upright. But even though the chute is supposed to help her stand, she collapsed, falling to the ground from exhaustion.

That didn’t stop my dad. He rolled up his sleeves – literally – and got down in the muck and mire with the cow. He wrapped one end of a metal chain tightly around his wrist, wrapped the other end around one of the calf’s protruding legs and pulled with all his might.

For close to 20 minutes, he sweated, panted, gasped and shivered. The calf was stuck. But with every tense yank, the calf came closer to freedom. To life.

Finally, my dad pulled a healthy calf free from the mother’s womb.

The calf was up and walking after only a few hours. The mother began nursing it.

We witnessed the miracle of birth. And on that day, I saw my dad do what he does best: save lives.

It’s something I had never seen him do before. But something I know he has done many times.

I can’t recall the first time a stranger walked up to me in public and told me that my father was the reason this stranger is still alive. It has happened more than once.

Even people who didn’t always like my family have admitted that my dad saved their lives. When he worked in the local emergency room, he saw people at their worst – and with all his heart, made them healthy again.

Still, I never realized what my dad really did. I knew he made sick people feel better – that’s just what physician’s assistants do. But he could never tell me about it. And he never has. Laws prevent medical providers from talking to other people about their work.

Probably wouldn’t have told me if he could have. He’s humble.

Before that day in May, I never understood what people meant when they told me that’s exactly what my dad did for them: save their lives.

But now I do – even though the life he saved in May had a couple extra legs.

I know that he gave life to my sister and me, too.

Someone who can both give life and save lives. What can we call someone like that?

I choose the word “dad.”

Happy Father’s Day to a man who preserves life, fights for life and helps others – and udders – live and love life.