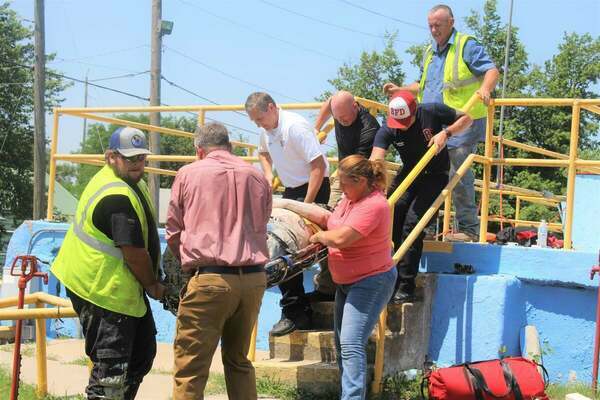 It was a fairly routine day at the Blackwell Water Plant until a worker was trapped at the bottom of one of the plant’s pits with difficulty breathing and a possible set of broken ribs.

The call came through Blackwell Police Department just after 11 a.m. and within minutes EMTs were on the scene, working in the heat and the muck of the pit to rescue the city employee with the help of the Blackwell Water Department and Detective Jay Brewer from the Blackwell P.D.

“We got the call, and our EMTs descended into the pit to assess the employee,” Fire Chief Cory Hanebrink said, “they packaged him and then proceeded to load him into the basket to extricate him.”

The crews worked for close to an hour as temperatures climbed into the triple digits. Department Manager Jim Hoos and his crew helped to gather rope and cold water. Also assisting was Public Works Director Jerry Eubanks.

Finally, with a spiderweb of ropes and a precise pulley-system, the water, fire, and police departments helped in getting the man carefully out of the pit, washed off, and onto an ambulance.

From there, the man was rushed to the Blackwell Fairgrounds where an Air-Evac helicopter had touched down waiting for him.

“I couldn’t be more impressed by the teamwork on display Friday,” Public Works Director Eubanks said, “The City of Blackwell’s departments came together heroically and without hesitation to help. None of this would be possible without the great leadership of our fire department, Fire Chief Cory Hanebrink, and our outstanding employees’ willingness to help in any situation.”