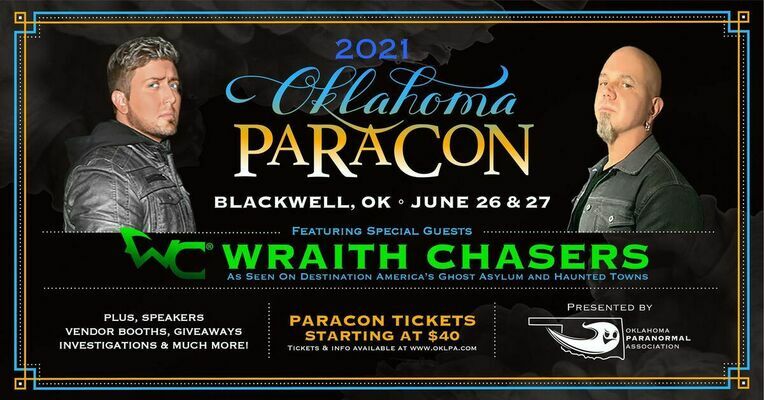 This weekend, the City of Blackwell will be hosting its first-ever ParaCon, a paranormal-themed convention that has also been tooled to feature its own anime convention, Ayakashi Con. ParaCon, which will run from Saturday to Sunday this weekend at the Blackwell Event Center, will begin Saturday at 10 a.m. and run through 6 p.m.

The convention will host a costume contest Saturday from 2:30 p.m. until 3 p.m. and feature guest speakers throughout the day. Prairie Smoke BBQ will be selling food at the convention as well. The vendor space will be open for free to the public.

Tickets for the guest speakers and other activities may be purchased online or at the door. For those lucky enough to have purchased “Golden Tickets”, the ghost hunt will take place Saturday night at the Blackwell Public Library. Guests are encouraged to cosplay or “dress up” as characters from movies, television, cartoons, comics, and more. Silver tickets will be on sale for $40 which will give guests access to the anime convention and paranormal convention which includes the guest speakers.

Speakers will be Jeff Provine speaking on matters of the paranormal at 10:30 a.m. with a panel on Cryptids & Folk Lore (Bigfoot, etc) at 11:15; another panel on the paranormal at 12:15 with Rick Park, and Chris and Mike from the Wraith Chasers guest group. Sunday, the convention will begin at 9 a.m. and run through 6 p.m