Oklahoma turnpikes go cashless: what that means for you 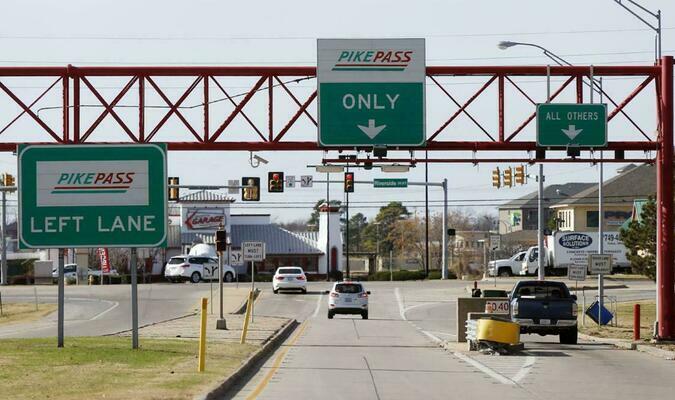 Those who travel Oklahoma’s highways and byways can “keep the change” as the Oklahoma Turnpike Authority transitions all of their toll booths into cashless- aka PlatePay- over the next four years starting with the John Kilpatrick turnpike in Oklahoma City on July 25. This change will attempt to make driving through Oklahoma’s turnpikes safer than ever.

“We recognize the fact that our customers want a safe, fast and efficient way to travel our system,” Oklahoma Secretary of Transportation and OTA Executive Director Tim Gatz said in a press release from the OTA. “Converting to cashless tolling will relieve motorists who struggle to find cash to put in the coin machines. In addition, this will cut down on the number of accidents at toll plazas,” Gatz’s statement read. Toll booths and coin machines will be phased out in Oklahoma being replaced by “PlatePay”.

The PlatePay system will scan a driver’s license plate and require the driver to log in online to pay an invoice at a higher rate than the cash-based system or PikePass requires. The OTA notes that PikePass will still be the more affordable means of travel. Those who choose for PlatePay will be paying over 75% more than current cash rates according to the OTA while PikePass users will save more than 20% across tolls.

Oklahoma Turnpike Authority’s Director of Communications Jack Damrill said that Oklahoma isn’t doing anything new here. Far from it, actually. “Oklahoma is actually one of the last states to convert to cashless,” Damrill said, we’re no longer a cash society...we’re following suit with with the rest of America right now in doing this.” Damrill repeated Director Gatz’s safety concerns.

“This is all about safety. This will cut down dramatically on accidents, which happen all the time throughout our turnpikes. Some are serious, some aren’t... but they are accidents. And that’s something we don’t want at all. These cashless systems will also be better for the environment, they’ll save people money, and most importantly they’ll help save lives,” said Damrill.

Oklahoma has 10 turnpike systems throughout the state, and Damrill noted that it won’t be an instant process. The transition to cashless will take some time.

In Kansas, Wichita implemented their first cashless ramp in February, paving the way for their plans at a 2024 cashless system throughout the state, according to Director of Communications Rachel Bell at the Kansas Turnpike Authority. “Wichita has been extremely receptive to the cashless ramp,” Bell said, “drivers want to keep moving, and that system has been quickly adopted and shown on GPS services as well. A cashless system was actually our second most requested change from drivers in a recent survey.”

When the news of the cashless turnpikes broke earlier this week through News9 reporter Lacie Lowry’s Facebook post, several outraged comments decried the cashless system and the inevitable job loss that would be facing tollbooth workers.

Rachel Bell stated their tollbooth takers would be taken care of as best as possible. “We’ve found very successful ways to integrate our booth workers into other areas of the KTA,” said Bell, “we’re working closely with every one that wants to stay. Some want to stay in that booth until the last drivers goes by, and we respect that as well.”

Drammel agreed with Bell. “We have 108 full-time employees in our booths,” he said, “we are actively helping all of them that want to continue to stay with the OTA to find new positions and opportunities within the organization.”