FAST 9 amps up the fun and stupidity, but sidelines a major talent 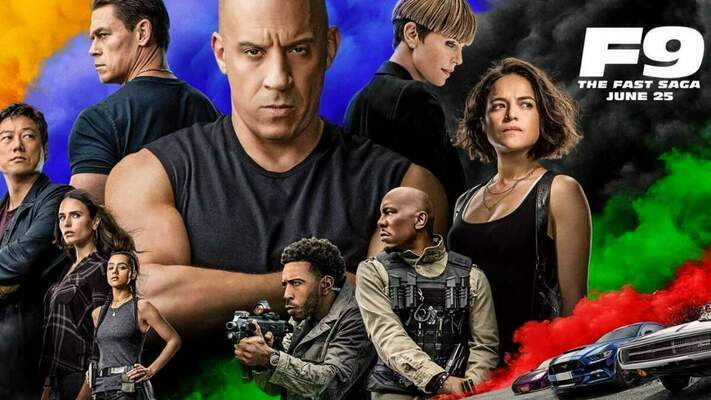 “There’s peace for me in the chaos.”

Movies are back, and Universal has proven that with the 9th installment of the Fast & Furious franchise, “F9: THE FAST SAGA” which to date has grossed a whopping $500 million dollars, proving to be the continued boost of NOS into a box office that is slowly recovering from the COVID-19 pandemic.

The Fast Family soon find themselves on another globe-trotting adventure as they race off to save the world for a weapon of unparalleled devastation. Along the way, some familiar faces join them for what could be their most dangerous assignment yet.

The Fast films have had what can best be described as a “unique” life. While the critical response and audience’s love for a franchise that goes from “realistic to stupid” is usually marked by plummeting box office receipts and harsh feedback, “Fast” is the opposite. The humble beginnings of a modest POINT BREAK ripoff with “The Fast and the Furious” following undercover cop Brian O’Conner (Paul Walker) busting a gang of street racing crooks has transcended into what I would best describe as “The A-Team” meets “G.I. Joe” and the audience has gone gaga for these. As such, it’s now one of the most profitable film franchises in the world, enlisting talent like The Rock, Jason Statham, Helen Mirren, and Charlize Theron along the way.

This installment keeps the franchise players at a minimum and brings some much-needed love to the characters from “Tokyo Drift”, the “Halloween III” black sheep of the franchise giving us some closure, finally, for Lucas Black’s character Shawn and his pal Han, the latter of which was such a sensation that the entire franchise had to play fast (heh) and loose with it’s own timeline to prolong his death as hilariously long as possible. Also, he’s not dead. How? Nobody knows. The film simply hand-waves this in a brief explanation and you’re just expected to roll with it. Why? Who cares.

Charlize Theron’s “Cypher” plays the Hannibal Lecter role in this, locked in a glass cube cell and calling the shots to John Cena and whoever he’s working with, which is fine but is a huge disservice to Theron who probably stands next to Michelle Rodriguez (the franchise’s unsung lady hero) as badass women who do their own stunts and have cut their teeth on a plethora of action-driven genre films. Theron's ATOMIC BLONDE and MAD MAX: FURY ROAD showed the A-lister as a more-than-capable ass kicker on and off the screen, and it's time she's allowed to do flying take-downs and suplexes with the rest of the F&F girls.

Cena, who is not quite as charismatic as The Rock nor as “art driven” as fellow WWE star Dave Bautista isn’t really given much to do here, which is another shame as it is his charisma that seems to be carrying the trailers for his upcoming DC/WB comic book film THE SUICIDE SQUAD. That being said, Cena does his job well enough. It’s just a shame he couldn’t be more of a scenery-chewing foil for our heroes.

Directed by “Fast” Godfather Justin Lin, F9 does give us some nice flashback scenes with a young Dom and his brother, which features the first genuine “street race” scene in the film series since perhaps 2009’s “Fast & Furious”. Billed as the penultimate entry in the series, God only knows where Fast 10 will be taking the crew.

There is a brief scene, a very important one, that seems to address the hilarity of these films in a very “meta” moment where Tyrese Gibson’s character Roman (a main-stay since the dreadful 2Fast 2 Furious) has almost an existential crisis where he believes that they’re “different”, explaining that there’s no rational reason why these seemingly normal people are able to survive these gigantic stunts and circumstances including dragging an entire armored vault through Brazil, battling a nuclear submarine, doing whatever the hell Fast 6 was about, or whatever happened in Fast 7.

Roman’s realization is met with laughter by his friends, and then shortly after the crew capsize a gigantic armored trailer with super-powered magnets in their cars while Tyrese and Ludacris fly a car into space to hijack a satellite.

I see this as the writer’s way of basically telling the audience:

“We know this is beyond stupid, but you love it.”

And, for better and worse, we do love it. I admit my cold, jaded, heart was warmed to tears seeing Han and his buddy Shawn from Tokyo Drift finally embrace. And I will be there, popcorn in hand, for whatever road Fast 10 takes us down.