Blackwell ghosts come out to play during ParaCon 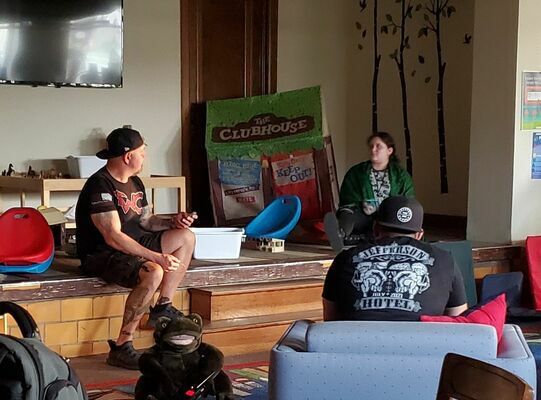 The fireworks that popped off through the past weekend might have stirred up a variety of noise and lights, but Blackwell’s dormant ghosts and spirits had some action of their own to close out June as the first annual ParaCon kicked off Saturday, June 26, bringing with it the Tennessee Wraith Chasers among several other statewide paranormal agencies, who conducted investigations at the Blackwell Public Library, Prairie Smoke BBQ, and Lipgloss & Sawdust.

The convention saw more than 30 vendors and over 400 people coming through the Blackwell Event Center, which convention organizer Tanya McCoy of the Oklahoma Paranormal Association said was a success for the first-ever gathering. McCoy has already booked the Event Center for ParaCon 2021, and stated that Blackwell’s hotels and businesses saw a huge boost from travelers and talent that came into the area.

The Blackwell Journal-Tribune was invited along for the Saturday night investigation, which began in the Blackwell Public Library’s basement with the Tennessee Wraith Chasers’ Founder Chris Smith and Tech Guru Mike Goncalves.

The investigation began just before 9 p.m. while the dying light of day was still coming in through the Library’s basement windows. Goncalves told the group, which include the staff of the library, that a common misconception was that paranormal happenings only occurred at night. Through the investigation, the crew seemingly made contact with the spirit of an older woman, believed to be a former librarian.

Further down Main Street at Lipgloss & Sawdust, a furniture boutique which has had it’s share of paranormal activity as documented by owner and designer Mandi Lovell, the ghost that seems to occupy the building had his share of fun messing with the store’s Bluetooth speaker sound-system. Lovell, who was present during the investigation, stated that the spirit will often change the store’s music from rock to country music. The group reported cold spots coming with dramatic changes in temperature and uneasy feelings.

Across the street, the restaurant and basement of Prairie Smoke BBQ in The Marketplace had their own share of activity. Philip Scott, Prairie Smoke’s owner and chef, had also previously reported his ghostly activity along with Lovell. The basement at Prairie Smoke seemed to be occupied by a less-than-hospitable spirit who told the investigation crew to leave via an electronic voice box.

The Journal-Tribune’s tour ended back at the library, this time in the top floor, where the spirit believed to belong to the librarian made mention of getting her ruler to punish those that went into her office.

Those who have hauntings and spooky dealings of their own are encouraged to reach out and provide testimony of their own.