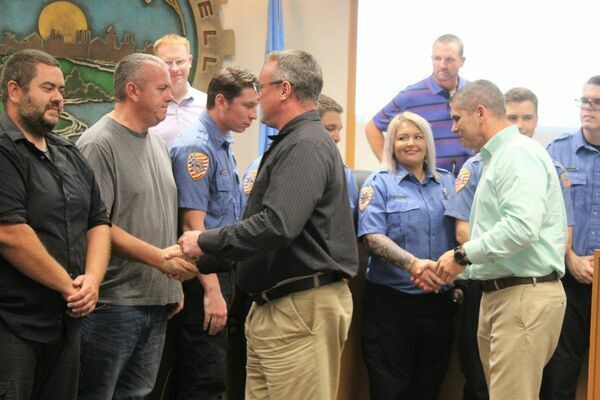 The Blackwell City Council met Thursday to discuss several matters, including the suspension of the city’s work with Chief Financial Officer Frank Crawford and a decision to bring back Meacham Financial Consultants.

The meeting began by honoring the men and women of the city’s water department, police department and fire department for their combined efforts in the June rescue of an injured worker at the city water plant. City Manager Jerry Wieland, Public Works Director Jerry Eubanks, Fire Chief Cory Hanebrink and Chief of Police Dewayne Wood praised those involved. The Council then voted to amend the City of Blackwell’s municipal code, which now brings medical marijuana usage into the same fold as vaping and tobacco as it applies to city property.

The Council voted that marijuana would also be prohibited on city property, including indoor and outdoor areas such as sidewalks, the county fairgrounds and others. The Council also voted to name Eubanks as the floodplain administrator for the City of Blackwell. Another order of business included the City of Blackwell entering into a funding agreement with the Blackwell Tourism organization, agreeing to make back payments from January 2021.

The City of Blackwell was previously locked in a stalemate with the organization regarding their contract and funding. At the request of the tourism organization, which stayed firmly against the previous city administration, their previous operating contract was renewed. The Council also heard from City Manager Jerry Wieland, who requested funding in the amount of $11,000 to pursue a con - cert-event to take place during Homecoming.

He said it would be unlike anything the City of Blackwell had seen before, heralding it as a promising opportunity that would grow and flourish. The funding was approved, and Council members said they were excited by the prospect