Review: BLACK WIDOW is one of the best Marvel movies. Period. 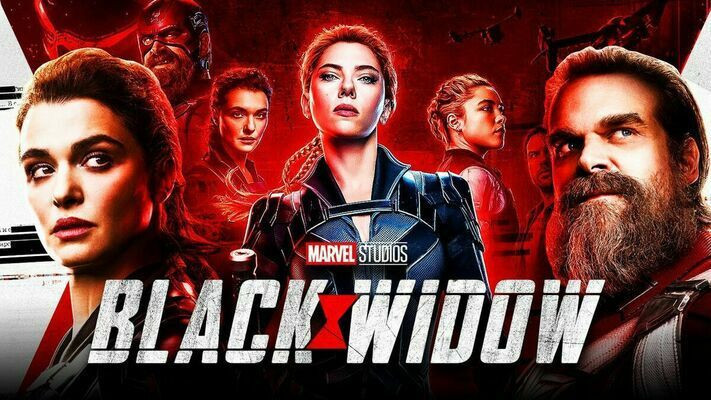 “I’m not the killer that little girls look up to.”

Marvel Studios’ BLACK WIDOW was released this past weekend with stunning box office figures, rave reviews, and perhaps more importantly, the idea that these MCU films can be actual “movies” under the right guidance and care.

The film opens in the early 1990s in a scene reminiscent of FX’s drama “The Americans” where young Natasha Romanoff and her kid sister Yelena are torn from their suburban Ohio home by their Soviet spy “parents” Alexi (David Harbour) and Melina (Rachel Weisz) after their cover is blown. The family makes off in a hidden plane after a thrilling chase, and lands in Cuba where their Russian handlers welcome them back from the job...and proceed to rip the girls from their “parents” arms and induct them into the Black Widow program which tortures, sedates, and brain-washes young girls into lethal and highly effective assassins.

The opening credits, set to a haunting cover of “Smells Like Teen Spirit” take us through the grim Geo-political climate of the 90’s including glimpses of President Clinton, the Gulf War, and the global trafficking of these young women as they’re packaged into shipping containers and “sorted out”, with the weaker ones being shot dead and the strong ones being taken into the Black Widow training. We see young Natasha and Yelena in a Soviet bunker posing for holiday photos, watching American cartoons, drinking American soda, and preparing for their lives undercover. We see young women fighting, training, beating each other. We see a dark, sordid, world.

Two decades later, Natasha (Scarlett Johansson) is on the run from the government and finds herself in Norway where a package sent to her from her long-lost sister Yelena (Florence Pugh) pulls her back into a mission she thought she finished long ago...destroying the “Red Room” (the Black Widow training lab) and killing the mastermind behind it all.

To do so, however, Natasha must rebuild her undercover family which includes her ex-Widow sister Yelena, their disgraced Russian super-soldier father, and their science-driven mother. This mission, of course, puts them in the cross-hairs of the dangerous assassin Task Master, a silent killer that can perfectly mimic anyone it fights with the lethality and trained moves of Avengers like the Black Panther, Captain America, Hawkeye, The Winter Soldier, and others.

BLACK WIDOW is directed by Cate Shortland who cut her teeth on horror-thrillers such as BERLIN SNYDROME and the WWII-set family drama/romance LORE. Shortland navigates the super-hero genre with ease and meticulous craft, perhaps even outshining her predecessor Patty Jenkins from 2017’s WONDER WOMAN.

The film’s beautiful and moody landscapes, tight European apartments, flooded alleyways, and snowy Russian tundras all play with lighting and rich palettes before they crescendo into an unapologetically disturbing, timely, and riveting climax at the “Red Room” where the common complaint of feminine strength against male aggressors is presented in a way that shocks and disturbs us. Natasha isn’t doing flips and battling CGI aliens or robots...she’s being beaten by a man.

The stakes feel real, and the audience feels every heavy punch and growl before the rug is pulled out from under us as we’re sent catapulting into a mid-air battle that seems to hearken back to Kathryn Bigelow’s 1992 POINT BREAK and that film’s meditative but nerve-wracking skydiving.

BLACK WIDOW written by Eric Pearson, Jac Shaeffer, and Ned Benson who collectively have had their hands on films such as THOR RAGNAROK, GODZILLA VS KONG, and THE HUSTLE.

Using these three films as an example, the writers seem to have sifted through the worst of their respective accomplishments, presenting a film with scenes like Alexi and his estranged daughter Yelena singing along through tearful and choked voices to Don McLean’s “American Pie”, Yelena presenting Natasha with the irony of her superhero celebrity appearance, and Natasha watching helplessly as a Widow died in-front of her.

Florence Pugh, who plays Yelena, carries with her the same gravitas and innocence she showcased in 2019’s horror-drama MIDSOMMAR as well as that year’s equally terrific LITTLE WOMEN. When the “family reunion” happens, it is Pugh who brings the weight of a little girl trying to rationalize that her life- and family- were a lie.

“It was real to me!” She cries, taking a pull from a bottle of vodka. The scene hits harder when she tells Natasha that she still tells people she has a sister, imagining an entire life for themselves in Ohio. She is a character consumed by nostalgia and pain.

Johansson acted her ass off in the best scene of 2019’s AVENGERS: ENDGAME, and here she is cool and collected as usual, but it’s her eyes that do all of the heavy lifting. The fear that widens them when she looks at Task Master, or the empathy and pain that softens them.

The true all-star here is David Harbour (Sheriff Hopper in Netflix’s Stranger Things) as The Red Guardian, a flabby, bearded, former Soviet hero whose glory days are long behind him. He’s burly and loud, acting as the film’s comedy-relief in most parts, but one scene in his Russian prison shows him carefully holding a “Red Guardian” toy doll, a reminder of what he was once was, and this brief glimpse beyond his boisterous persona speaks volumes for the character.

He’s accompanied by Rachel Weisz who has seemingly not aged a day since her days in the Brendan Fraser MUMMY films. She plays the matriarch of Natasha’s family as a deeply troubled Frankenstein, wracked by the guilt of the monsters she helped forge in the Black Widow program. Her smile and teary eyes under her distinct eye-shadow as she looks at her family for the first time in 20 years shows why Weisz is one of the best.

BLACK WIDOW prides itself on femininity and the strength of the female. One scene, in particular, finds Yelena explaining she doesn’t get periods because of the fact that the Widows are neutered once they’re indoctrinated into the program.

While this might seem silly or gross to the general audience, such a scene being in a Marvel film- a Disney one no less- shows great effort has gone into the care of these female characters, and that the director (and writers) made it a point to show that what happened to the Widows isn’t as surface-level “comic-booky” as saying they were simply “programmed to be badass”.

BLACK WIDOW is one of the best “Marvel Cinematic Universe” films ever released, and is a fitting- if belated- tribute to Johansson who has been a superhero player since 2009’s IRON MAN 2. Be sure to stick after the credits for a nice treat leading into the Disney+ HAWKEYE series!

BLACK WIDOW is now playing in Tonkawa, Ark City, and available for $30 on Disney+ Premier.