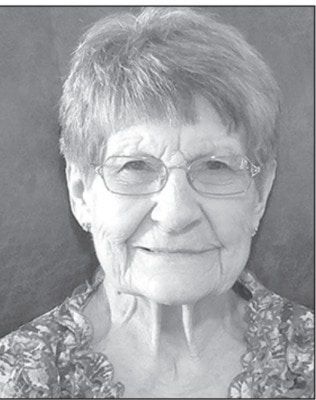 Theda Mae (Bain) Sheets joined her Lord and Savior on July 15th, 2021. She was born July 27, 1927 in Tonkawa, Oklahoma to James Virgil Bain and Luda Mae (Hembree) Bain. She attended Sunnyside School through 4th grade when Sunnyside closed. She then attended Tonkawa schools where she graduated in 1944.

She played flute in the high school band and was a member of the chorus. She was employed at the Valley Lumber Company as a book keeper from her senior year in high school through August 1947.

Theda attended Northern Oklahoma Junior College. She was a member of the college orchestra, band, and chorus and graduated with an associates degree in business in 1946. Theda married Alfred Lee Sheets on September 21,1947 at the First Christian Church of Tonkawa.

They established their first home in Wichita. She worked at Montgomery Ward in downtown Wichita, KS. Theda and Alfred moved to Blackwell in 1948 where Theda was a bookkeeper for Kay Electric Cooperative until 1952 when she left to start their family. Alfred and Theda had three children: Theda Rae, Gary, and Terry. She worked part time for Bynum Lumber Company in Blackwell until 1956.

She then helped Alfred with his custom harvest business while being a full time mom. The family moved to Newkirk in 1960. Theda’s employment included Newkirk Herald Journal and Albright Title and Trust Company. She worked a total of 26 years for Miller Mortgage Company in Ponca City, retiring in 1993 as Sr. Vice President. She returned to Newkirk Herald Journal later in life, taking a short break to care for her husband until his death in 2016. She worked until she turned 88. During Theda’s life she was a member of Kay County Insurance Women and Mortgage Bankers Association.

She served her community in PTA, helped with Girl Scouts, and Community Chest. She was a dedicated member of Newkirk First Christian Church where she sang in the choir, was their choir director, was a Sunday school teacher at several levels, helped with Vacation Bible School, was a deacon and an elder. Theda served as President of the Board, chaired many committees, held several office positions, and was a member of many committees for the church.

She also served on the Board of Directors for the Newkirk Library. Theda enjoyed spending time with her beloved husband Alfred and their children, boating, and camping. Many of the children’s friends spent good times at the lake with them. She also enjoyed spending time with extended family and friends. Theda and Alfred frequented Branson, Missouri go visit family. They loved traveling wherever they could with their grandchildren.

She also enjoyed going to family reunions at various destinations. Theda was preceded in death by her parents, her husband who was the love of her life for 69 years, two brothers Jack and Wayne Bain, one sister Pearl McCord.