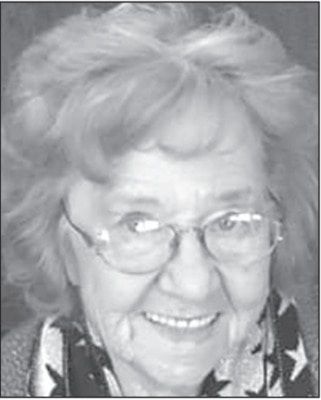 Velma Lea Turner, 94 of Blackwell, OK, went to join her Heavenly Father July 18, 2021. She passed peacefully surrounded by family at Alliance Health Ponca City. Viewing will be held at Trout Funeral Home of Blackwell Friday, July 23 from 10:00 A.M. to 8:00 P.M.

Services will be held at Bethesda Church Saturday July 24, 2021 at 10:00 A.M. Pallbearers will be Albert Cottle, Gene Turner, Dyle Cottle, Jason Turner, Colt Margerum, and Dakota Turner. Her honorary pallbearers will include all of her great grandchildren. Arrangements are under the direction of Trout Funeral Home of Blackwell, 301 W Blackwell Ave, Blackwell, OK 74631. Velma was born to Helen and Henry Barrows May 13, 1927 in Blackwell, Oklahoma.

She grew up surrounded by the love of her six siblings and attended Blackwell Public Schools with the class of 1945. Velma met the love of her life, Murl Turner and they were married July 25, 1943 in Bristow, Oklahoma. Throughout their 64 years of marriage, Velma was a devoted wife and mother. While raising her four children, she worked hard as a homemaker. After her children’s departure from her home, Velma took on varying occupations. She co-owned and worked at the Braman Café for a short time before working beside her husband at their Ozark Water Plant. She also worked at the Wheatheart Nutrition Center as well as Bev’s Flower Heaven. Additionally, Velma contributed to the Blackwell Journal Tribune writing the “Tidbits” section of the paper, before retiring to be a full-time grandmother.

Velma was a long-time member of the Bethesda Church and a member of the V.F.W. Women’s Auxiliary. She loved her family, her garden (especially her roses), camping, bingo, and it was universally understood that she could make the best hot rolls known to man. Velma was loved by many and will be missed dearly by all who knew her. Velma is survived by her sister, Vera McCurry, her daughter, Barbara Cottle, her daughters-in-law, Carla Turner and Beverly Turner, all residing in Blackwell. Alongside them are 11 grandchildren, 30 great grandchildren, 12 great, great grandchildren and numerous nieces and nephews.