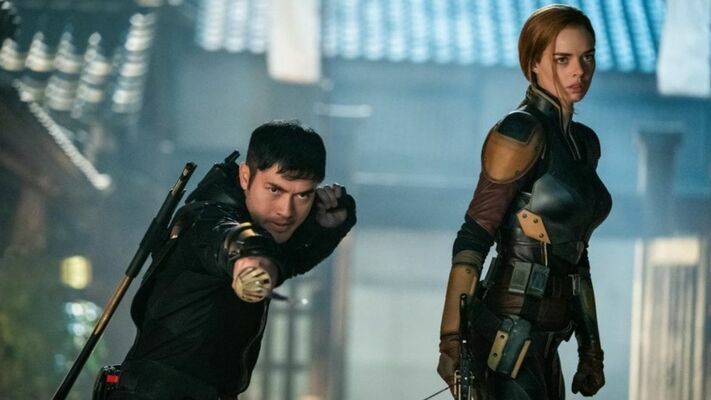 “We all make mistakes. It’s what we do next that matters.”

SNAKE EYES, the high-octane and brazenly weird feature film about the titular G.I. Joe ninja character, released this past weekend in the hopes of relaunching the G.I. Joe film franchise which has been dormant since 2013’s respectable G.I JOE: RETALIATION.

The end result is a 2-hour action feature that gets progressively more bizarre at it goes on, including gigantic CGI Anacondas before amping up to a climax scene that features all of the ensemble cast walking in slow-motion towards the camera before they do battle with an insane Yakuza wizard that blasts fireballs from an ancient gem.

Orphaned as a child after his father is killed before his eyes in witness protection, Snake Eyes (Henry Golding) has no name and no future. He’s a drifter, going from one underground fighting ring to the next, making end’s meat to stay alive. After one exceptionally brutal match, he’s approached by a man named Kenta (Takehiro Hira) who offers him a life in the Yakuza in exchange for the man who killed his father.

Working for the Yakuza, Snake Eyes becomes quick friends with Tommy Arashikage...until it is revealed Tommy is the namesake of an ancient ninja clan who have protected Japan and influenced world events for 500 years. Kenta, a former member of the clan-turned-Yakuza boss, tells Snake Eyes to kill Tommy, revealed to be a spy. Snake Eyes disobeys, and he and Tommy soon find themselves on the run and in Japan, where Tommy offers Snake a life in his clan.

Of course, Kenta is not done with Snake Eyes or his grudge against Clan Arashikage. And to make matters worse, the clan find themselves in the middle of a war between a global terrorist network known as COBRA and an international peace-keeping entity….G.I. JOE.

Written by Evan Spilotopoulos (The Huntsman), Joe Shrapnel (REBECCA), and Anna Waterhouse (RACE) this film is absolutely bonkers. The beginning is a simple enough set-up, and we’re introduced to the world of the Arashikage fairly easily when Snake and Tommy arrive at the ninja clan’s picturesque Feudal-era castle compound outside Tokyo. The writing trio master every trope in the book when it comes to Snake’s training, his romantic and playfully combative tension with an Arashikage bodyguard, his “rough around the edges” street upbringing...all of that comes to a massive halt when the first act twist drops. Then, I became VERY intrigued.

It is the film’s complete earnestness when it comes to casually mentioning that the Arashikage protect an ancient gem capable of annihilating anyone in their path that prepare you for when Snake is told that his former Yakuza boss has allied himself with COBRA, specifically the organization’s “upper echelon” queen, The Baroness.

Her arch-enemy, the G.I. JOE warrior named Scarlett O’Harra (Yes, seriously) is a feisty redhead who dresses in body-armor and fires a crossbow. None of this is ever questioned or explained. It’s kick-ass.

SNAKE EYES in a monumentally silly film that wears the storied history of the G.I. Joe franchise like a badge of honor rather than something to shrug off with a laugh. There’s no irony or self-awareness here, and the characters don’t guffaw and smirk at the camera. It’s refreshing, and frankly adds an unexpected gravitas to the film. If the characters believe the stakes are real, so does the audience.

Henry Golding leads the film coming off back-to-back hits like CRAZY RICH ASIANS and LAST CHRISTMAS, and his performance as Snake Eyes is shockingly multilayered. Snake Eyes isn’t your traditional protagonist. In-fact, he’s a genuinely bad person. The film also makes no qualms about this, and it is genuinely nice to see.

Golding carries the weight of the film with co-star Andrew Koji who plays Tommy, the man who will become the white-clad ninja Storm Shadow. Koji’s performance is one that is always simmering. His rage and over-bearing responsibility have made his persona known as the “shadow before the storm”, hah. But, it works.

Robert Schwentke directs the film messily but effectively, and raises comparisons to a lower-budget David Leitch (Atomic Blonde, John Wick 3). If there was such thing as a “perfect” representation of G.I. JOE...this movie would be it.

SNAKE EYES is now playing at AMC Stillwater and the Cowley Cinema 8 in Ark City.