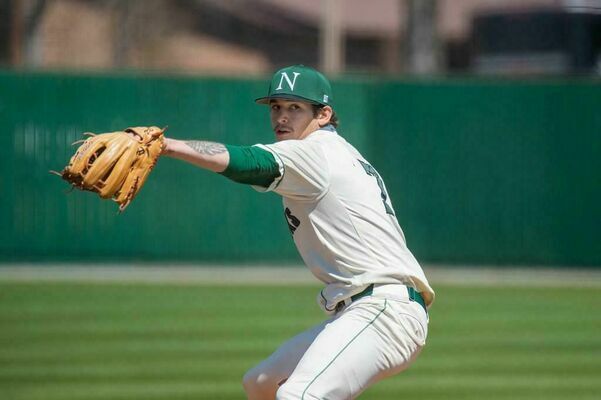 When Northeastern State University’s latest MLB draft pick steps onto the field as a member of the Houston Astros, his grandmother will do her best to cheer him on from the stands.

But if Ethel Kelly can’t be there in-person, she’ll root for pitcher Nic Swanson from her home in Blackwell.

“I don’t know how many grandkids I’ve got, but he’s one of the best,” Kelly, 85, said of Swanson. “He’s been that way ever since he was a little bitty kid – had a ball and glove in his hand.”

The Astros selected Swanson, a Bixby High School graduate, in the 16th round of the MLB Amateur Draft on July 13.

Even though Swanson isn’t a Blackwell Maroon, his parents and grandmother are. And they say Blackwell folks can be just as proud of him as anyone.

Kelly graduated from Blackwell High School in 1955 just one day after the infamous May 25th tornado wiped out the eastern half of the city, she said. Swanson’s parents – Jennifer (Kelly) Swanson and Jeff Swanson – graduated in 1990 and 1991, respectively.

They raised up a 6-foot-two right-hander who had one of the best ERAs in the nation for a good portion of the 2021 season, pitching 87.0 innings, according to data from Northeastern. He struck out 106 batters in the season, just short of a new record there.

In early May, the Mid-America Intercollegiate Athletics Association named the redshirt freshman as the Pitcher of the Week. Just a couple weeks later, the National Collegiate Baseball Writers Association named him to the organization’s All-Central Region team.

“What a dream come true,” Jennifer Swanson said of her son’s draft. “We worked real hard with him. We put a lot of time and a lot of money out, just traveling and spending our life on the road and on the baseball fields. It’s paid off.”

Nic Swanson has had his eye on the ball for most of his life, and his folks are confident he’ll keep it there.

“I can guarantee you 100% he’ll go all the way,” Jennifer Swanson said. “He will be Top Dog eventually as long as they don’t hurt him. I mean, he’s strong. He has never had an injury or nothing.

“And we’re knocking on wood and praying to God. He’s awesome. He really takes care of himself.”

His body isn’t the only thing he keeps in check, his mother said. No big ego here.

With that upbeat outlook and an up-and-coming career, Nic’s an inspiration to young baseball lovers and players – including one in Blackwell, Jennifer Swanson said. Her great-nephew, Tucker Boyer, 12, is a top fan.

“He’s really a big follower of Nic,” Jennifer Swanson said. “He’s impressed, and he wants to go there.

Kelly is quick to note that Swanson has visited Blackwell before. He recently stopped by for a family reunion.

Even though he’s not often in Kay County in-person, Kelly brings him into her home – virtually, of course – when she streams his games online. (She prays for him, too. Because, next to seeing him, “That’s the next best thing,” she said.)

No word yet on when his first game with the Astros will be. Of late, he’s been in Florida for his sign-in and rookie camp. But as soon as he’s on the field, a host of family members with Blackwell ties will be cheering him on – whether they’re in Texas or not.

“I’ve watched all of his games,” Kelly said. “He’s a pretty good ballplayer.”