THE SUICIDE SQUAD is an exposed, gory, beating heart of a film. A must-see. 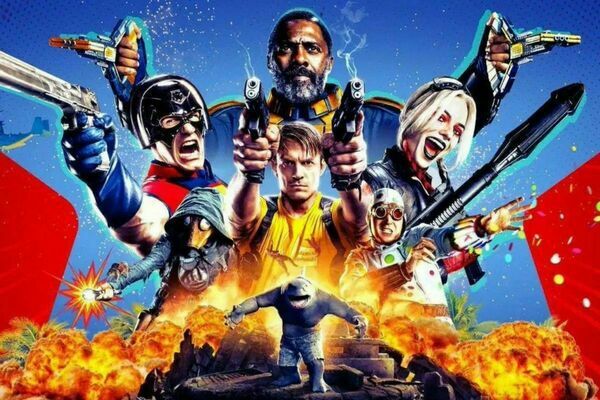 “I cherish peace with all my heart. I don’t care how many men, women, and children I kill to get it.”

WB and DC Comics THE SUICIDE SQUAD is a laugh-out-loud comedy, a ridiculously satisfying (and gory) action film, and an emotionally satisfying and irreverent character drama all wrapped up in a blood-soaked, colorful, completely bonkers comic book film package.

The film opens with Johnny Cash’s “Folsom Prison Blues” echoing over the Belle Reve Prison in Louisiana, a supermax facility for the super-powered criminals of the world.

Amanda Waller (Viola Davis), a shadowy and ruthless government agent, offers 10 years off the sentences of those imprisoned there in exchange for their service to “Task Force X”, a government-sanctioned black ops group comprised of metahumans who embark on some of the most dangerous missions available. The Task Force is, of course, aptly named...THE SUICIDE SQUAD.

This time, the mission is simple. Infiltrate a South American island-nation and destroy any and all evidence of an extraterrestrial monster known as “Project Starfish”, locked away in a former Nazi military complex named “Jotunheim” (Home of the Giants, in Norse mythology).

To do so, Waller and her Task Force leader Rick Flagg (Joel Kinnaman) recruit marksman assassin Bloodsport (Idris Elba), Military killer Peacemaker (John Cena), seasoned brawler Harley Quinn (Margot Robbie, once again) and a slew of other inmates including Polkadot Man, King Shark, Captain Boomerang, Weasel, Mongol, Ratcatcher II, Javelin, and others for this high risk, high reward operation. Don’t get too attached though. They’re dying to save the world.

THE SUICIDE SQUAD owes much to 60’s and 70’s war films like WHERE EAGLES DARE and A BRIDGE TOO FAR with shades of APOCALYPSE NOW.

As the squad’s initial infiltration mission on the island goes horribly wrong the team is shot up and separated, allowing for a lot of playful scenarios and character moments, especially between Idris Elba’s Bloodsport and Daniela Melchior’s Ratcatcher II, who both become the real beating heart of the film as Elba is a father doing what he can for his estranged daughter who hates him, and Ratcatcher is doing all she can to preserve the memory and hopes of her own father.

King Shark, a big goofy CGI Shark voiced by Sylvester Stallone, is frankly adorable. He is the most warm-hearted and simplistic of the Squad, and genuinely just seems sweet and full of wonder...when he’s not biting people in half.

Harley Quinn, in her third DC films entry following 2016’s SUICIDE SQUAD and 2020’s BIRDS OF PREY, finds a lot to say here about her abusive relationship with The Joker and how that effects other relationships she might have. Quinn’s platonic friendship with team leader Rick Flagg is also nice to see, and completely rewarding.

That isn’t to say the film is devoid of action or horror. Gunn got his start directing ultra-violent and low budget “TROMA” horror films, and while there’s plenty of sick and bloody kills throughout the film’s extended action sequences (especially a killing contest between Peacemaker and Bloodsport) the real stomach-churning horror comes when the Squad discovers the Project Starfish lab and sees the heinous and sickening experiments done on men, women, and children.

Those disappointed in 2016’s original SUICIDE SQUAD will have absolutely nothing to worry about here. This film isn’t just a different, better, movie. It’s not even remotely comparable. If you can imagine GUARDIANS OF THE GALAXY’s breakneck pace, fun, and wit and picture it as a darkly violent black comedy with DC characters, you have a rough idea on what to expect.

Something the 2016 film was sorely lacking wasn’t just a cohesive plot, but great performances, and that is corrected here with a stark difference. Idris Elba plays his usual “cool and collected” self with chip on his shoulder, but what sets him apart from others is the gravitas and weight he brings to his performance.

John Cena, considered a laughing stock for a long time for his corny roles in action films like THE MARINE or 12 ROUNDS, is unhinged here with darkly hilarious intensity as the Peacemaker, sort of a murderous Captain America, and he is absolutely an integral piece to this film’s already well-oiled machine.

Robbie, as mentioned earlier, dials back her insanity from last year’s BIRDS OF PREY and turns this third iteration of Harley Quinn into the closest she’s come to being a realistic sort of character. She’s still insane and still hilarious, but it is in this film she’s given a real purpose.

And, of course, Viola Davis is finally allowed to unleash Hell and her screaming, snarling, spit-flying rage as Amanda Waller in the film’s climax is the stuff dreams are made of. Davis is, and always will be, one of my favorites.

THE SUICIDE SQUAD is now playing in theaters in Ark City and Stillwater and is streaming on HBO Max.