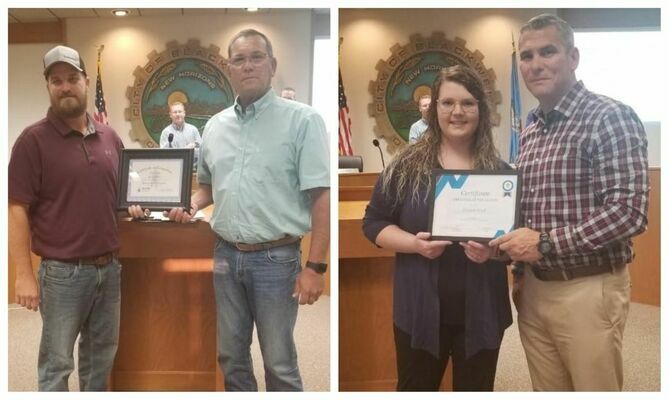 The Blackwell City Council, Blackwell Municipal Authority and the Blackwell Facility Authority all held their regularly scheduled meetings on Aug. 5 in the council chambers. Ward 2 Councilman Jon Webb was absent.

Blackwell City Manager then honored Elizabeth Wood from the utility office as Employee of the Month. The council heard monthly reports from the department heads and approved the consent agenda that included bills from Oklahoma Municipal Law ($12,031.250; RS Meacham CPA ($8,375) and an emergency sewer repair by Walker Plumbing to the Wheatheart Nutrition Building ($5,839).

The council then got into the business agenda and following a presentation by financial advisor Jon Wolff, the council approved two resolutions to be presented to the Oklahoma Water Resources Board on Aug.17 for a $3.6 million loan to purchase and install smart meters for the city and a $13.240 million loan for a new water plant in Blackwell. These loans are very low interest running less than two-percent interest. The resolutions were approved unanimously.

The council then worked through several other business items on a resolution for the Oklahoma Municipal Assurance Program, a resolution for to change the residency requirement for the Lake Blackwell Trust to include all Kay County residents and the second reading of the ordinance on golf carts, ATV’s and UTV’s being on city streets and highways.

The council then heard a presentation from Jennifer Rogers of the OMPA on a request to delete certain commercial rate references and adding several other provisions in the ordinance as it applies to solar energy or electrical generating customers. The resolution was approved 4-0.

The fire department was given the go-ahead to seek bids for a thermal camera, scan tool, window replacement at the fire department auto extrication equipment and another portable ventilator. The votes were unanimous on all of the requests.

The city council adjourned their portion of the meeting at 7:20 p.m.

The Blackwell Municipal Authority was gaveled in by chairman TJ Greenfield. The trustees worked through the agenda approving the loan applications to Oklahoma Water Resources Board, getting department reports and awarded a bid to Brian Hall of T&B Recycling for electric depart surplus. Hall was the only bidder. The BMA adjourned at 7:38 p.m.

The Blackwell Facility had only one item on their agenda and that was to approve the B Street Baseball Field License agreement with the Blackwell Baseball Association, which took three minutes and adjournment at 7:42 p.m. was gaveled.