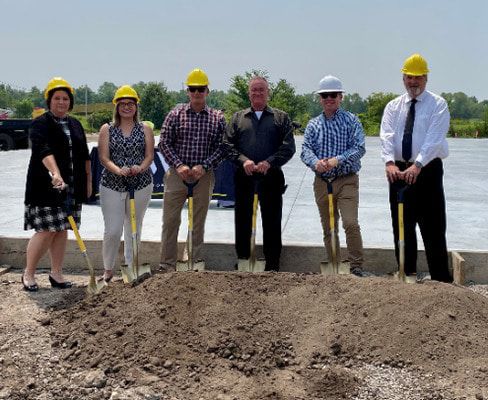 Dollar Tree is one step closer to planting roots and sprouting from the ground in Blackwell.

City officials and corporate developers on Aug. 5 conducted a groundbreaking ceremony for the soon-to-be-built Dollar Tree store, meaning Blackwell is one step closer to having a new retail outlet on Doolin Avenue.

The ceremony began at noon and featured various city officials and others who have moved the project forward, city officials said in a news release. The store will be built at 1301 W. Doolin Ave. next to Walmart and United.

The City of Blackwell previously entered into an agreement with the Woodmont Co., a real estate development agency, to help bring the store to the community. The city also worked with Retail Attractions, LLC, which helped broker the deal.

“The contract was amended several times as issues arose and solutions were sought and implemented,” city officials said in a news release issued following the ceremony.

“Without Rickey and Mayor Greenfield, we would not be here today,” Grant said. “These projects are always hard. There are no easy projects. If ever there was a project with speed bumps, this is it.”

Greenfield thanked Woodmont and Hayes, saying the City of Blackwell’s agreement with the Retail Attractions had “been amended to provide more attention to the economic development of Blackwell.”

In June, the City Council voted to pay Retail Attractions $1,500 more per month to have Hayes and his company on-call in an unlimited capacity.

“Getting the first one on the ground is important,” Hayes said. “This is the matrix-breaker. There is more development to come.”

“Although a representative of Dollar Tree is not present today, Dollar Tree is so happy to be opening a store in Blackwell and bring value to the community,” Grant said.