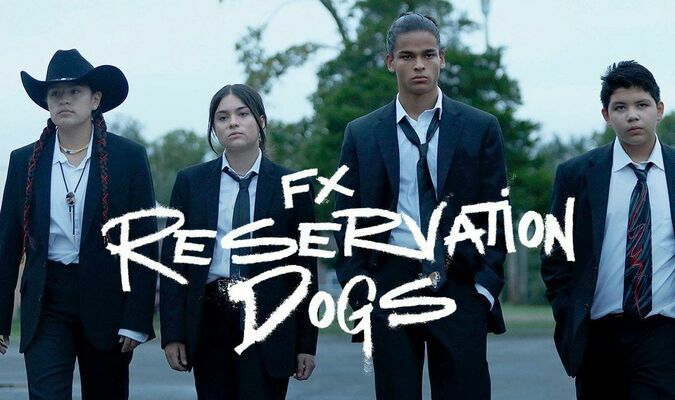 The series, filmed in and set in Oklahoma, follows four delinquent Native American teens on their crumbling Indian Reservation (or Rez) as they christen themselves vigilantes in an effort to raise, steal, or borrow enough money to get them to California.

Taking it’s name (and humor) from Quentin Tarantino’s 1992 crime-drama RESERVOIR DOGS and from a colloquial term given to stray reservation mutts (Rez Dogs), this FX series is foul-mouthed, dirty, and witty while also offering unexpected gut-punches of heartfelt drama and a scathing commentary on the Indigenous way of life.

“Reservation Dogs” opens with our four leads: the foul-mouthed Willie Jack (Paulina Alexis), the quiet and reserved Cheese (Lane Factor), the assertive and calculating Elora (Devery Jacobs), and the unofficial leader and wayward soul Bear (D’Pharoah Woon-A-Tai) as they commandeer a hot chip delivery truck in order to sell it for scrap and to take the contents for themselves to sell as a side-hustle.

Their joyride, however, sets in motion a hilarious chain of events that now find these four “Rez Dogs” accidentally known as a gang, which puts them on the map for the local “NDN Mafia” as well as the mostly inept Tribal Police Officer Zahn McClarnon (DOCTOR SLEEP, THE FOREVER PURGE).

Now, these four teens have to evade the law, rival gangs, and their own pasts as they fight- and commit- crimes in the hope of a better life.

Coming from an obviously real and inspired upbringing by writer-director Harjo, Reservation Dogs has a playful grit that isn’t exclusive to Native American teenagers, but anyone that grew up in a lower-income midwestern community.

The first episode tells us that this gang is still reeling from the death of their friend a year prior, claiming that the rez took his life and that they need to escape before they end up like him. We can infer that he killed himself, but the show hasn’t outright stated yet. It’s a fantastic way to set up the series and lays out the very real stakes and the show’s extremely sincere and realistic take on death and how it impacts a close-knit friends group.

There is gallows humor to the series. There’s darkness and pessimism, but there’s hope and hilarity. One of the series’ more hilarious staples is Bear’s vision of a “Spirit Warrior” named William Knife-man played by Native American comedian Dallas Goldtooth flips the “Noble Indian” Hollywood stereotype on it’s head and presents Bear’s spirit guide as a sheepish and goofy sort that isn’t very noble nor particularly wise.

The second episode deals with the gang at the local Indian Health Services Clinic, which of course lends itself to the obvious fact of how hellish reservation clinics are with the hilariously rude receptionist, long wait times, and general oppressive despair.

That is to say though, that Harjo doesn’t make the Native American’s plight with government healthcare the forefront of the episode. The series isn’t interested in the stereotypes here, it plays with them and uses them to advance their characters and let them shine.

In the “NDN Clinic” episode, Cheese is given perhaps the best subplot as he is mistaken for an ailing and near-blind elder’s grandson. He takes the misidentification in stride, and spends time with her, talking to her and wheeling her outside to sit and enjoy the air. It’s a moment that hits like a ton of bricks and lets the audience breathe. For all the chaos on display, there are moments of peace and beauty.

Episode 3, which was released this past Monday, is titled “Uncle Brownie” and looks inward while looking outward. Elora, Bear, and Willie Jack seek out Elora’s uncle to train Bear to fight. Her Uncle strikes a deal that if they can sell the old weed he found on his property, he’ll train them.

The episode gives us a broader look at the Okmulgee setting with faded streets, crumbling wood houses, boarded-up windows, and the culture of Sonic Drive-Ins, dispensaries, car washes, and dusty bars.

While “Reservation Dogs” does not care if you don’t understand the culture behind it, it allows you to contextualize it within something you do understand...and “Uncle Brownie” is an episode that lets us explore a setting familiar to us while also empathizing with an old man (the eponymous uncle) as he reflects on his glory and the bittersweet sting of how low- and hot- the sunset years burn after all.

While those who have grown up in the rusted Oklahoma towns that the series showcases might understand terms like “snag”, “skoden”, “stoodis” or various vocalized inflections, I imagine those without that upbringing might be lost at first- but adapting is key, and the series absolutely encourages you to absorb rather than observe.

“Reservation Dogs” is the kind of barrier-busting high concept drama that FX has been known for and fits perfectly in the same catalog that houses cultural milestone shows such as Sons of Anarchy, The Bridge, Nip/Tuck, American Horror Story, Fargo, Legion, The Americans, and more. It is also a welcoming sign that 20th Fox’s new owners, Disney, have kept their hands off and allowed the network to flourish.