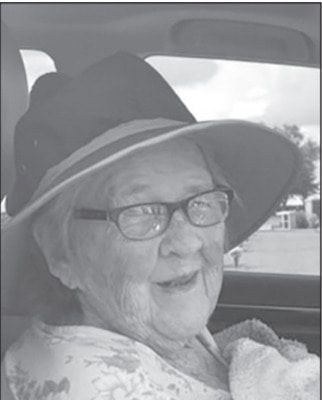 Wilma Nell Clark of Ponca City, Oklahoma passed away on August 11, 2021, at her home at the age of 92 years, with her loving family and loyal protector, Sky Blue by her side.

Wilma Nell Moyer was born on December 2, 1928, in Blackwell, Oklahoma the daughter of Wilber Moyer and Elsie Pearl (Shepherd) Moyer. She attended Chikaskia Valley Elementary and graduated from Blackwell High School in 1946. She married Fred V. Clark “Clark” on December 2, 1949, on her birthday, and they made Blackwell their home. Together they raised their children, Fred V. Clark, Jr., Sharon Treistman, Ronald Wayne, Gay Lynn, and Lisa Lea.

During these years she and Clark built their home on her family land and farmed together. Wilma Nell worked for Southwestern Bell Telephone Company in Blackwell as a switchboard operator for many years. She enjoyed working with her cousin, Emma Lou Moyer, life-long friends, Kate Wilson, and Mary Claire Groeneman. Following her retirement, she drove a school bus and worked in the cafeteria at Union 61 School and Blackwell High School, all through Lisa’s school years.

During this time, she and Clark owned and operated “Clark’s Campers” out of their home. She also worked for First Assembly in food service, as well as in the daycare and school with three-year-old children as a teacher’s aide. She later worked for the Corp of Engineers with Clark, and together they were the gate attendants at various campgrounds. Her last job was caring for Dalton Laughlin which brough her a lot of joy. She was very close with her sister-in-law’s, Mona and Carol Moyer. Together they enjoyed cooking, baking, sewing, quilting, and knitting. She also loved attending craft shows with her daughters and friends. She loved fashion and shopping until the day she died.

She is survived by her children, Ronald Wayne Clark, and wife Linda, and Lisa Lea Clark Cookson, and husband Jerry; sisters-in-law, Mona and Carol Moyer; grandchildren, Jason, Jeremy, Janson, Jaden, Chase, Steven, Shawn, Scott, Jeff and Jenni; as well as ten great-grandchildren. She was preceded in death by her parents; husband, Fred V. Clark, Sr. “Clark”; children, Fred V. Clark, Jr., and Gay Lynn Clark; and brothers, Bill, and Bob Moyer. Viewing will be held from 2:00 until 8:00 p.m. on Friday, August 13, 2021, at Roberts and Son Funeral Home. The family will be present from 2:00 until 4:00 p.m.

Graveside services will be held at 10:00 a.m. on Monday, August 16, 2021, at Resthaven-Sunset Memorial Parks in Ponca City. Masks are required. Memorial contributions may be made to Hospice of North Central Oklahoma and to the Ponca City Humane Society, sent in c/o Roberts and Son Funeral Home, 120 W. Padon, Blackwell, Oklahoma 74631. On-line condolences can be made at www.robertsandsonfh.com.