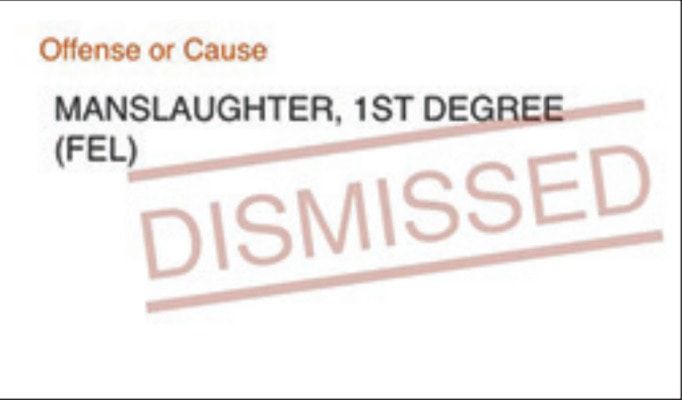 The case of the State of Oklahoma vs. John Mitchell for manslaughter in the first degree in the alleged shooting death of Michael Godsey on May 19,2019 was dismissed Thursday morning by Kay County District Judge Lee Turner.

Mitchell was a Blackwell Police Lieutenant at the time of the incident and was called out to help with an incident in which Godsey was in a vehicle and had been shooting at another car, her mother’s car and even the first police officer on the call. Charges were filed in November 2019 and a preliminary hearing was held on February 18-19,2020 in Perry in front of Judge Nikki Leach.

The hearing lasted two days and Leach let the charge of first-degree manslaughter go forward to the district court for arraignment. The pandemic and courthouse closure delayed the appearance in front of Judge Turner until May 26,2020.

The first motion to quash the indictment was presented by Gary James, Mitchell’s attorney. Mitchell would plead not guilty, and the battle was on between James and special prosecutor Jason Hicks. Over the course of the last year, there have been six motions or briefs filed on the original motion to quash.

The motions can all be read on the Oklahoma State Court Network pulling up case number CF-2019- 589 in Kay County.

James presented six issues to the court in the original motion to quash the indictment. They were:

The state did not establish Lieutenant Mitchell's actions were in Excess of Force permitted by law or said policies and guidelines; Which would create a presumption allowing the officer to be subject to the criminal laws of the state.

There was no evidence presented at the preliminary hearing that suggested that Mitchell had killed Godsey, and that testimony presented at the hearing indicated a justifiable and excusable homicide.

James also cited that there was no probable cause to bind Mitchell over for trial.

Hicks replied in his filing, that Mitchell used excessive force, violated clearly established law, and that sufficient evidence was presented at the hearing to establish that Mitchell’s actions resulted in the death of Godsey. The hearing on August 20,2020 would be the last hearing as the lawyers submitted briefs and arguments to Judge Turner over the next ten months. There were volumes of arguments and videotape to review as well as the transcript from the preliminary hearing. Judge Turner’s ruling was 44 pages long. Here is a recap of some of his conclusions in that final document.

• Keith Denton was not trained nor qualified to be able to testify that Lt. Mitchell’s use of deadly force was excessive. As the findings of fact outlined, Denton’s actions during the early morning hours of May 20, 2019, demonstrated that he lacked the abilities that is required of a “reasonable officer” during an obviously extremely dangerous and rapidly escalating situation.

• Denton did not appreciate the extremely dangerous situation that was occurring since Godsey had shot a round at her mother prior to his arrival. Denton could have easily been shot by Godsey while walking up to her mother’s vehicle or while standing at the driver’s window talking to her.

Whether his subsequent actions that night were attributable to his wanting to talk Godsey “down” or other factors, his actions that night would disqualify him from being considered “a reasonable officer at the scene” in the context that the term was used in the United States Supreme Court cases.

• Additionally, Denton does not possess the training regarding active shooters that Lt. Mitchell possessed. He also stated his perception of the events including positioning was not the way he thought it had occurred once he saw the videos prior to testifying. Therefore, for the reasons stated, this Court finds that Denton lacks the requisite training and experience to testify as to whether Lt. Mitchell’s actions that night were reasonable or unreasonable.

• Investigation, in this case, was turned over to the Oklahoma State Bureau of Investigation. Investigators were summoned to immediately take over the investigation of the shooting. The OSBI investigators could have been summoned to testify if they had requisite expertise in police training, policies, and procedures and could apply that knowledge to any violations that occurred during the events of May 20, 2019.

If any investigator lacked the requisite training and experience to testify concerning any relevant findings, the results of the investigation could be testified to by an investigator and then a professional trained in the expertise and knowledge necessary could have been called as an expert witness just as expert witnesses are called in a myriad of cases.

The state was allowed additional time to argue the fact that Lt. Mitchell fired the fatal shots. The judge indicated in his ruling that the medical examiner ruled Godsey died of multiple gunshot wounds and then agreed with the motion to quash, citing based on the totality of the circumstances that it was excusable homicide.

Hicks has indicated in the media that he will appeal.