Golden Chick is cookin' and cluckin' in Blackwell 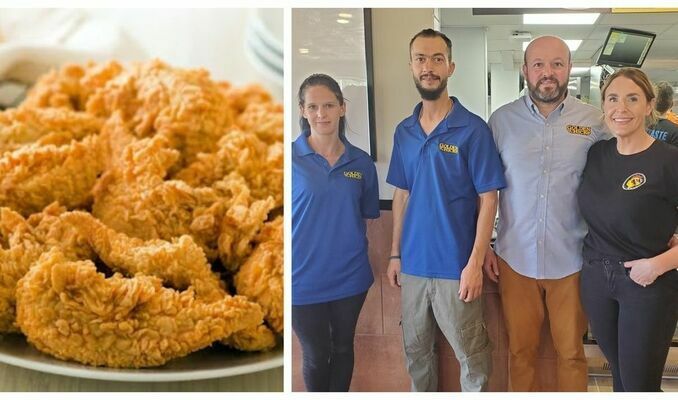 The year-long wait for crispy fried chicken in Blackwell ended last week with the opening of the Golden Chick restaurant at the intersection of Main Street and Doolin Avenue in the former Taco Mayo building.

The loss of the cost-efficient Mexican meals formerly served there is still painful to some people, according to some well-circulated Facebook memes.

But the long lines of cars wrapping around the Golden Chick parking every night show that Blackwell residents are ready to sink their teeth into another eatery.

Owner Katee Nemer took a deep breath on opening day as she stepped aside from the kitchen to praise her employees, who hit the ground running, she said.

She talked about her excitement for having Golden Chick flourish in Blackwell. “We have 30 employees,” Nemer said. “We didn’t really announce that we were opening today. … It just kind of happened, so this is all word-of-mouth, and as you can see, that travels fast.”

Fast, it seemed, was an understatement. The City of Blackwell’s official Facebook page posted that day about the restaurant’s opening, which garnered more than 60 shares on Facebook within a matter of hours. The restaurant’s own Facebook page had 60 as well. Nemer, a Blackwell local, owns the Golden Chick location with her husband, Tony.

They operate it with Khaled Jrab, the store manager and managing partner, as well as assistant manager Cindy McGuire. “We started work on the Golden Chick at the beginning of 2020 and hit a few bumps along the way, but we’re open now, 10:30 - 10:30 every day of the year except Thanksgiving,” Nemer said.

“Right now, it’s all about making sure the employees have everything down and bringing the best possible experience to our customers.” Blackwell’s Golden Chick is the third restaurant from Tony Nemer, and his business in Blackwell is far from over, he said. “We acquired the former Chinese buffet, the Dragon Palace, and are working on turning it into a pizza buffet concept,” Katee Nemer said. “We’ll have more information on that soon.” Drive-through customers should enter the Golden Chick parking lot from 1st Street.

“The way it was previously, you would enter off of Doolin and go right to the drive-through window,” Nemer said. “Golden Chick has made our method of entry specifically to ensure the best flow of traffic and the best space to allow dine-in customers to park.”