Garfield and Maguire return in SPIDER-MAN: NO WAY HOME 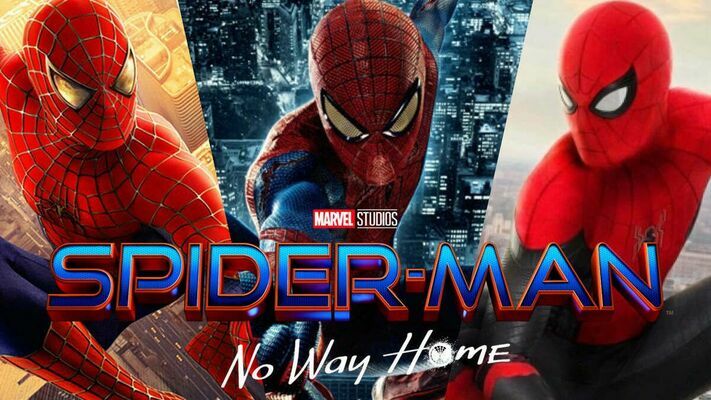 “I believe there’s a hero in all of us…that keeps us honest…gives us strength…makes us noble…and finally allows us to die with pride, even though sometimes we have to be steady and give up the thing we want the most – even our dreams.”- Aunt May, SPIDER-MAN 2 (2004)

It’s been a long time coming, but Sony Pictures and Marvel Studios are bringing three worlds together with the upcoming SPIDER-MAN: NO WAY HOME.

Fans have long speculated after the runaway success of 2018’s Oscar-winning animated feature INTO THE SPIDER-VERSE that Sony would be staging something similar, bringing back two previous Spider-Man actors with Tobey Maguire (Sam Raimi’s early 2000’s trilogy) and Andrew Garfield (Marc Webb’s THE AMAZING SPIDER-MAN 1 & 2 in the early 10’s) to team up with current Spider-Man Tom Holland (The Avengers films) in some dimension-hopping event.

Besides the sheer spectacle, the event would also help to bring long-sought closure to fans of Maguire (SPIDER-MAN 4 was scrapped early in development after a much-hyped reveal) and Garfield (THE AMAZING SPIDER-MAN 3 was scrapped following the lackluster release of 2).

This, of course, was only a rumor. Until now. Sunday, a trailer leaked onto TikTok of SPIDER-MAN: NO WAY HOME confirmed the multiverse as well as the fact that these villains are from their respective films. Then, on Monday, some grainy photos leaked onto Twitter showing Tobey Maguire and Andrew Garfield on set, in their respective costumes.

Casting began last year for the then-untitled third entry in Holland’s Spider-Man series, revealing Jamie Foxx (Electro, TASM2) and Alfred Molina (Doc Ock, SM2) were set to join the film along with Benedict Cumberbatch, who plays Doctor Strange in the MCU. This sent fans into an absolute fit. Surely bringing back villains from two separate Spider-Man series’ would mean our heroes would return as well, right?

Maguire, Garfield, Holland, and pretty much everyone involved or speculated adamantly denied any rumors of Holland’s third Spider-flick to be the epic crossover fans craved. Of course Sony and Marvel still have not officially commented on this huge leak.

NO WAY HOME is set to follow 2019’s FAR FROM HOME which ended with the jaw-dropping scene of Quentin Beck (Mysterio, played by Jake Gyllenhaal) releasing Spider-Man’s secret identity to the world. Now, in a desperate bid to return to his normal life, Peter Parker asks Doctor Stephen Strange, the Sorcerer Supreme, to make the world forget he’s Spider-Man.

Of course, due to shenanigans that aren’t made explicitly clear, this seems to tear a hole in the fabric of space and time and cause the universes to converge, funneling in various baddies from other Spider-Man adventures. Now, faced with the cataclysmic threat of the universe collapsing, Peter Parker must team up with the wise and sagely crime fighter Spider-Man (Maguire) and the despondent world-worn Spider-Man (Garfield) to save the day...and the future.

Marvel has been toying with the concept of multiple dimensions thanks to their Disney+ series’ LOKI and WANDAVISION, and now it seems this is the culmination of those efforts.

It is also believed this high-concept film will segue Tom Holland’s Spider-Man into Sony’s seemingly separate Spider-Man universe outside the MCU which is where Tom Hardy’s VENOM (2018) and the upcoming VENOM: LET THERE BE CARNAGE take place as well as MORBIUS and the recently announced KRAVEN films, which have all been giving Spidey’s villains their own Spider-less origin stories and adventures.

As someone who grew up with Maguire’s films but deeply loves and defends Andrew Garfield’s two turns, I am more than excited to see where this goes.

Last time we saw Maguire was in 2007’s mixed SPIDER-MAN 3 which ended with Peter and Mary Jane (Kirsten Dunst) sharing a slow dance after their engagement crumbled in the face of his split personality brought on by the black suit. The two made amends after a climactic battle between Sandman (Thomas Hayden Church), Venom (Topher Grace), Spider-Man, and Harry Osborn (James Franco). Harry died in Peter’s arms after he finally forgave him for killing his father, Norman, the sinister Green Goblin (Willem Dafoe).

When we last saw Andrew Garfield’s Peter Parker in 2014’s THE AMAZING SPIDER-MAN 2, he was an emotional wreck after the love of his life, Gwen Stacy (Emma Stone) died in his arms following a harrowing battle with Electro (Jamie Foxx) and, finally, The Goblin Harry Osborn (Dane DeHaan), a sick and twisted shell of himself. Peter spent months without leaving Gwen’s grave and gave up the identity of Spider-Man until a downtown attack by The Rhino, and the emotional words of Aunt May (Sally Field) inspired Peter to once again don the mask that caused him so much pain and anguish.