What's the future Blackwell High look like? New and Maroon 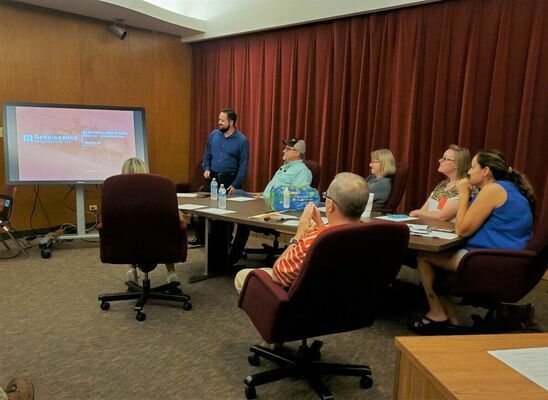 The Blackwell Board of Education got an extensive, detailed look at construction plans for a proposed new high school last week during the board’s regular meeting.

“What makes Blackwell High School special?” That was the question presented to the board by a representative from Joe D. Hall General Contractors and Renaissance Architecture. The representative used meticulously rendered concept art and design plans to show what the school could look like in the future.

The study center’s silo, a circular brick structure, was shown as a filed-down sitting area that will keep the look and aesthetic of the silo that students young and old will recognize. At the same time, it will give the study center more visibility and openness. The circle driveway, a staple of the high school’s north entrance, also will remain.

The biggest change, though, seems to be the idea of moving and consolidating the school’s offices, counselor spaces and teacher’s lounge into the northeast corner of the school. These areas will be added onto the study center. This will allow for more classroom space in the school’s A-wing, where the offices currently are.

It will also prevent the school from being scattershot, with lounges, copy machine rooms and other resources spread throughout the building. The new offices will have a safe room to be used in the event of an emergency.

The A-wing will have its own bathrooms, and it will be the home of a new art classroom. The school’s art room currently sits at the south end of the study center. Along with the new art room, a science room will be expanded and made “state-of-the-art,” allowing for the installation of gas and water lines at every work table.

All of this, Superintendent Shawn Haskins explained, will allow more room for what matters most: the students.

“This isn’t just renovation,” Haskins said to the board. “This is a modernization. Everything is getting touched up.”

The high school’s campus has largely remained unchanged since the 1960s, Haskins said. The proposed new high school aims to modernize every aspect of BHS to present a high school campus that is not only safer and more accessible, but also more accommodating for teachers and students.

The lockers, BHS’s towering metal banks seen throughout the study center, will be scaled down to waist-high collections. This will help open up the study center and allow for more visibility and safety.

With the new school will come a modern heating and air conditioning system. The mechanical rooms in each wing of the building will be gutted and removed, allowing for the hallways to be more open. Classroom doors will be scaled back, so opening the doors between classes won’t impede foot traffic.

Classrooms will be expanded as a result. New shelving and storage units will be installed in every classroom, giving teachers more organizational space.

Haskins said a common complaint among high school faculty stems from the fact that the rooms offer no privacy when it comes to sound, which carries down the halls thanks to the window slats at the top of the rooms. Also, students become distracted by watching people in the hallways.

Teachers have attempted to limit the visibility of distractions by installing curtains and facing their students away from the windows. By removing the windows, teachers will be able to focus on education rather than worrying about classroom arrangement.

The iconic indoor garden areas, patches of greenery that flourish under calming ceiling windows that allow the hallways to take in natural light, will remain. This, explained the representative from Joe D. Hall, is another feature that makes BHS unique.

One of the most substantial changes to the high school is the proposed cafeteria, which will include an outdoor area with tables and chairs.

The expanded cafeteria, lunch line and picnic area will be at the south end of the study center where the art room currently sits. The area will include a modernized custodian’s office, which will allow custodians to move their equipment more freely.

The football field will have a new concession stand, bathroom facilities and press box. The auditorium will be enhanced and brought into modernity with a new lighting system, sound system and stage lights. These will better accommodate musical performances, assemblies and more.

Sprinkler systems for fire suppression will be installed throughout the campus. Handicap-accessible ramps, including one for the school’s library, will be built in as well.

If approved during a public election, the project is expected to take at least two years to complete.