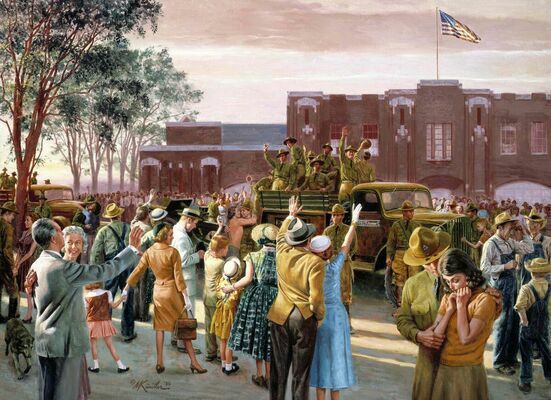 You see it anytime you drive down Doolin Avenue: Blackwell’s former National Guard armory, one of the town’s most unique historical facets. And thanks to a famous historical painting, people from all over the country have seen it, too.

“Goodbye Dear, I’ll Be Back in a Year” isn’t just the title of a popular World War II-era song. It’s also the name of a colorful painting showing soldiers deploying from our town’s armory during the fall of 1940.

At the time, the armory was home to soldiers from the 45th Infantry Division. More than a year before the attack on Pearl Harbor launched the United States into war, American leaders already saw the need to mobilize troops and train them for conflict. Those troops came from all across the Heartland – including Blackwell. The emotion and scale of that massive movement is embodied in the painting.

Artist Mort Kunstler depicts green-clad soldiers loading up in the backs of military trucks, waving farewell to their families. The painting was made several years ago, but it again made the rounds on social media on Saturday. The painting is set in the morning, and tall trees envelop the red, brick building. Pink clouds fill the sky. An American flag flies high above the armory’s roof. At the front and center of the image, a young solider hugs a forlorn young woman.

Here’s what the National Guard wrote about the historical context of the painting:

“As the urgent need for preparedness swept over the nation in the fall of 1940, the members of Battery C, 2nd Battalion 189th Field Artillery were preparing to leave their armory for Fort Sill, Oklahoma. Several days earlier, on September 16, 1940, the president had ordered the initial callup of the National Guard for one year of Training. The greatest peacetime mobilization in the nation’s history was getting underway with National Guardsmen in hundreds of units in 27 different states answering the first call to the colors."

"By mid-1941, months before Pearl Harbor, the entire National Guard would be on active duty--nearly all would serve for five years or more. The mobilization of the 18 National Guard Divisions, 82 separate regiments and 29 observations squadrons doubled the size of the U.S. Army. The National Guard played a vital role in World War II combat operations.”

The title of the painting captures the optimism these troops had as they left. As we know, of course, that would change. They wouldn’t be back in a year. They’d be whisked off to war, far away from their homes – and their “dears” – here.

“The Oklahoma National Guardsmen of the 45th Infantry Division had little idea that morning that their departure for Fort Sill marked the shortest leg of a long journey that would take them to battlefields far from home,” Guard officials wrote. “The 45th became one of the most famous divisions of the war taking part in eight major campaigns. The 1st Battalion, 189th Field Artillery and the other units of the 45th continue the proud ‘Thunderbird’ heritage.”

This painting is one of only a few dozen historical paintings the National Guard has commissioned as part of its Heritage Series.

The first painting of this series, ‘The Whites of Their Eyes,’ was completed in 1961.” “Goodbye, Dear” is even more unique because it’s the only painting in the series of an armory anywhere in the United States.

If you haven’t seen this painting for yourself, you need to check it out. A copy is on display at the Top of Oklahoma Historical Society Museum right here in Blackwell. And if you decide you like the painting, you’re in luck.

Anyone can order free copies of it from the National Guard. The prints are in landscape orientation, and they can be ordered via email. You can even pick from different sizes of the painting. To check out the specifications or place an order, visit https://www.nationalguard.mil/Resources/ Image-Gallery/HistoricalPaintings/.

To view “Goodbye Dear,” visit https://www.nationalguard.mil/Resources/Image-Gallery/Historical-Paintings/Heritage-Paintings/. Then, scroll down the page until you come across the title of the painting.

The entire series is a beautiful retelling of some of the most historic military events in history. And it’s pretty cool that Blackwell, of all places, made the cut.