"Safety, stability, and the future": Blackwell citizens urged to vote for bond 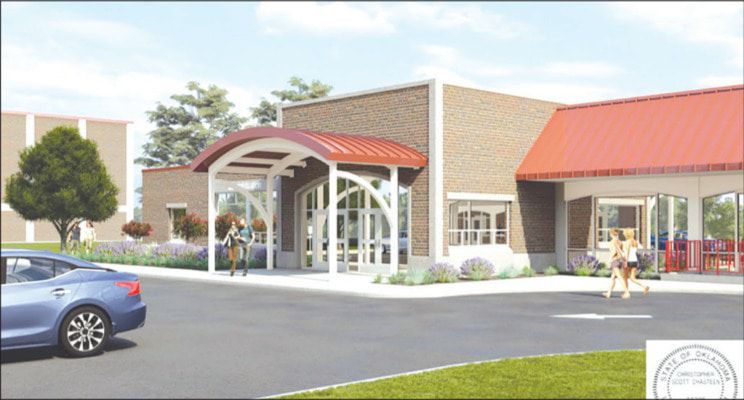 The Blackwell Board of Education approved on Monday night a bond to modernize and remodel the Blackwell High School campus. A representative from Stephen H. McDonald & Associates, Inc. was on hand to walk board members through the $23 million bond, which would be paid off over the course of 15 years if approved by voters during an election in November.

The bond would be an 11.88% property tax increase. An example used was that, if an individual paid $600 in property tax, the amount would be multiplied by .1188, which would be $71.28. Thus, that individual would pay $671.28, an increase of $5.94 per month on their property tax. Homeowners can calculate the exact cost by visiting the Kay County Treasurer’s website.

The bond will cover a wide range of modernizations and improvements to bring Blackwell High School into the 21st Century. The project will include new front doors, windows, ceilings and paint to the agricultural and wood shop building, which was built in the 1970s.

It also includes a new entry canopy, interior and exterior paint, front sidewalks and heating equipment in the practice gym, built in 1968.

The southside football facilities, built in the early 1950s, will have handicap-accessible ramps and seating as well as new aluminum seating, a new press box and a new building that will house restrooms, a concession stand and a locker room.

The auditorium, built in the late ‘60s, will have handicap-accessible restroom renovations, a new storefront, new doors, new paint and ceiling work in the lobby, and new carpet and new seating in the auditorium. It will also have new stage sound and lighting equipment, new house lights, new paint and a new HVAC system.

The roofing on the B and C wings at BHS will be completed along with the high roof in the auditorium and the agriculture and wood shop roof. They were not completed during the work done in 2018.

In the 1960s, Blackwell High School was named “School of the Month” by National Schools Magazine. As Superintendent Shawn Haskins described, the original Blackwell High School was a “Cadillac.” He said it was a sleek, high-end icon of its time that was the best not only in the county, but also across the state. It was the perfect fit for Blackwell’s students, but those were the students of the past, he said.

“Our students deserve better,” Haskins said. “Our students deserve a school that is up to their standards. Blackwell’s schools are the highest scoring testers in the county, according to the State of Oklahoma’s A-F report cards. Even outside of Kay County, we’re up there with the top, with the elite.”

The modernized campus will be built as affordably as possible, Haskins said. He said the choice came down to either giving Blackwell a new high school from the ground up or putting the $23 million into the entire campus. The “bones” of the school are still good, Haskins said, but the campus is in dire need of modernization.

“We brought two companies and a construction management firm in here and asked them, of our buildings, which needed the most work,” he said. “Unanimously, they all said the high school facilities. Blackwell Elementary is our newest building and cheapest to maintain, and the middle school has had work done to it over the years.” “Blackwell High School’s campus is the same now as it was in the ‘60s and ‘70s when those facilities were built. I thought they were crazy, telling me a building made in the 1930s – Blackwell Middle School – was in better shape than one built in the ‘60s.”

“The company we’re working with on the remodel, and everyone we spoke to, is in love with Blackwell High School. The spirit of it, the uniqueness. You won’t find another building with that sunken library, that kind of Study Center, the hallway gardens. We’re keeping that spirit. We’re keeping what makes Blackwell High School itself. … But we’re doing so in a way that will protect our kids and nurture a modern learning environment. We’re doing this for their safety, for their education, for the comfort and stability of our teachers."

“We have to reinvest in our schools. By starting there, it’ll spread to the entire community. Peckham has a new facility. Medford just finished theirs. Perry is doing theirs. … Blackwell has to keep up,” Haskins said. “We have to, or we’re going to fall far enough behind that we may never recover.'

"Blackwell rallied passionately in the 1960s to support the new high school, and I want to see that happen again. Our kids deserve it. Our community deserves it. When you invest in the future, invest in our kids, everyone wins. Everyone.”

Haskins lamented the current state of the high school for children with disabilities. He said that’s why compliance with the Americans with Disabilities Act will be important at the new school.

“My heart breaks for these kids that simply can’t go the same places their peers can, and I want this bond to pass for them too,” Haskins said. “I want them to be able to access the library or the football stadium with no problems. I want them to be able to use our bathrooms and classrooms without any hassle. This is for all kids. This is for every individual piece in Blackwell’s future.”

The modernizations will save the school district money that will, in turn, go right back into the classrooms, Haskins said. The district currently spends $15,000 to $20,000 each year on the upkeep of the heating and air systems at BHS. Because of the lighting and outdated energy, Haskins said that BHS makes up a considerable amount of the district’s $247,000 electric bill. The money saved from BHS’s modernizations will go into technology and resources in the classroom.