Kay County residents remember 9/11: "I was praying for everyone" 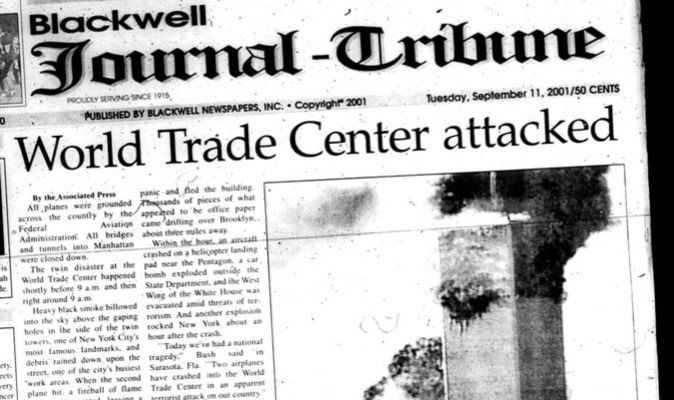 Days come and go, and the planet Earth keeps spinning. But people who are old enough to recall the events of Sept. 11, 2001, say they remember when the world stood still.

As the 20th anniversary of the 9/11 terrorist attacks dawns, people across the nation are sharing the memories of a day that forever changed the nation and the world.

In an effort to keep those stories alive, The Journal-Tribune asked several Kay County residents to talk about where they were, what they were doing and what they learned from that day. This story tells their stories.

John Franz, a former pressman for The Blackwell Journal-Tribune, remembers exactly what he was doing that day. He was printing the newspaper that would deliver the news of the attacks to people in Blackwell.

A few days ago, he looked at a picture of that very newspaper. Printed the afternoon of the attack, the banner headline bearing that news spread across the front page.

“I was preparing to go to work when I turned on TV to live coverage, and saw the second tower hit,” he said. “I then went to work to prepare to print the edition pictured.”

Deer Creek resident Ken Gaskill was on his way to work when he heard the news.

“I was driving to work at the Conoco help desk in Ponca City, listening to ‘Imus in the Morning’ on KFH AM out of Wichita when Don said, ‘We were watching news on a TV monitor in our studio and saw a plane crash into the World Trade Center’ as I was driving past the Blackwell airport on Interstate 35,” Gaskill said. “When I got to my desk, there was a voice message from my wife to call her as soon as I could. She had our grandkids snuggled up close as they watched the events unfold and we prayed together over the phone.”

Blackwell resident Lesley Riddle was working in Ponca City at the time.

“I was working at Sykes Call Center in Ponca City – always a busy place with calls coming in constantly,” she said. “I was assisting a caller who said something about the attack. I flipped up the internet to see what was happening. Within five minutes, there were no calls coming in at all. Our world had shut down, and everyone was glued to the TV set. Many of us were sent home because of lack of support needed.”

Local auctioneer Kris Mapel was harvesting crops in Mahall, North Dakota, near the Canadian border when the attack happened.

“I was up watching TV when it was live coverage,” he said. “I got my two workers to watch the TV. Now we were near the Air Force base and many missile silos in the area. We drove around. It was an eerie feeling seeing all of the military personnel patrolling. I was by there last week thinking about it. The motel is now gone. How time marches on.”

Local travel agent Debbie Simunek was driving to Blackwell and had the radio on.

“I was delivering Peckham school entries to the Kay County Fair,” she said. “I remember sitting at the stop light at Main Street and Blackwell Avenue. The light turned green, but no cars moved. Everyone was listening so intensely to the news on the radio.”

Local pharmacist Clark Bishop was in high school when the attacks happened.

“I was in my AP History class as a senior at Owasso High School,” he said. “We turned the TV on after a school staff member told Mrs. Gillespie, our teacher, there had been a plane crash in New York. Our class watched the second plane hit the second tower live. I remember that moment vividly. I was towards the back of the class and remember watching the majority of my classmates bring their hands to their heads or faces while they gasped in disbelief.

“Very few words have spoken the rest of that day while TVs displayed the horror of that present reality in each classroom. My mom came to the school that afternoon to grab my car and fill it with gas. She told me to come home straight after school. My girlfriend at the time was worried about a military draft and what it could mean for me and all the young men my age.

“I remember watching President Bush’s stunned face when he was told about the attack while he had been reading books to children. I remember he was criticized heavily for the length of time it took for him to get up off of the chair he was sitting in and spring into action. I’ve often thought since then how I didn’t understand that criticism. Leaders are humans, too, and he was shocked, just like me and my classmates the moment that second plane hit the tower.”

Former Blackwell resident Stacy Handy said she remembers the feeling of shock that came over her when she learned of the attack.

“I was at home with my two-year-old in Blackwell,” she said. “My active-duty husband was in Korea. After watching the attacks live on TV, I started trying to get ahold of my husband in Korea to let him know what was going on in the states. They were unaware of what was happening at the time. I started praying for everyone. I was glued to the TV in disbelief that something like that was happening in the United States.”

Medical clinic receptionist Sherrie Oder was on her way to Newkirk that morning.

“I was driving to work at the clinic,” she said. “I thought it was a skit or something on the radio at first. When I got to the clinic in Newkirk, everyone was talking about it. It was real. We listened to the TV, and no one was coming for appointments. When we heard about the second plane, I wondered if things could happen in other parts of the country. This could spread. [My son] Adam was just eleven days from his first birthday, and he was here in Blackwell at daycare. I thought, ‘Do I leave work and go get him? Do I see how this plays out?’ When the plane hit the Pentagon, then the plane in Pennsylvania was hijacked, we closed clinic and came home for the day. A very scary time when you have a small child.”

Blackwell resident Reba Newton was recovering from a medical issue at the time.

“I had just gotten home from the emergency room,” she said. “I fell that day and broke my foot and had to have a cast put on. I just sat down and turned the TV on when the news broke about the Twin Towers.”