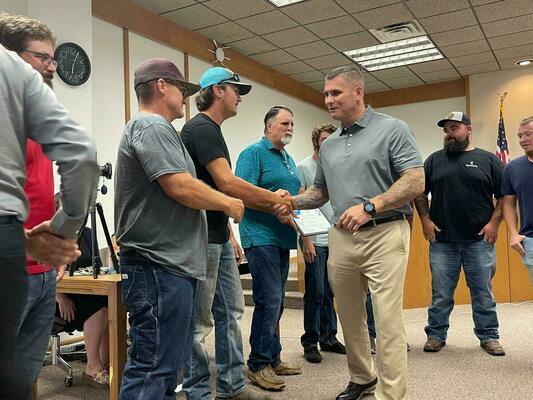 The Blackwell City Council met last Thursday to honor Blackwell’s Street & Parks Department and to host a controversial public hearing in regard to an internet service provider, Clarity Telecom, wishing to provide service to Blackwell which lead to deliberation between several members of the council and the owners of Blackwell’s current cable and internet service, Get Real Cable.

The night began with a meeting of the Blackwell Planning Commission who heard from Freedom Homes LLC and it’s developer Jimbo Carnley who wished to build affordable, modern, homes on the lot of land where the former Northside School used to be, on Doolin Ave.

This project will start immediately with the construction of 4 homes and is the result of a joint effort between the City of Blackwell, Blackwell Municipal Authority, Blackwell Economic Development Authority and Freedom Homes out of Stillwater. The last housing subdivision in Blackwell was constructed in the early 1970’s.

After the Planning Commission met regarding housing, the City Council meeting began at 6 p.m where they officially approved the housing development as well as the approval of a contract with Grand Lake Mental Health Center.

Through this agreement, GLMH, LLC will take possession of the old clinic building just north of the current hospital once the new hospital construction is completed. The project includes an estimated $2.5 million in building renovations and a 6000 sq. ft. addition with plans to match the new hospital facilities.

This new / renovated site will house a 24/7 Emergency Mental Health Facility and adjoining clinic/crisis center which is estimated to create an additional 40 jobs in our community including doctors, nurses and support staff.

Pepper explained that with the over-saturated internet provider market already that bringing in another provider would snuff out Get Real, who has been serving Blackwell for over 20 years. He also voiced his frustration over the 40+ page contract Get Real was involved in with the City of Blackwell while Clarity was given a significantly shorter and structured one.

The City Council asked about how local the Clarity Telecom repairmen and technical support would be in the event of outages, which happen frequently due to storms and power outages. Clarity would not have a call-center or technical support technician in Blackwell, but in Enid and possibly Stillwater. Clarity conceded that they could possibly amend their agreement to have a call center in town. Get Real Cable operates out of Blackwell, and has the ability to detect and sometimes repair outages in a moment’s notice.

Council members Webb and Husted wished to wait until council members Braden and Shepard were present to decide on the matter of allowing Clarity Telecom a permit for internet/cable operations. The matter was left to be discussed at a later date.