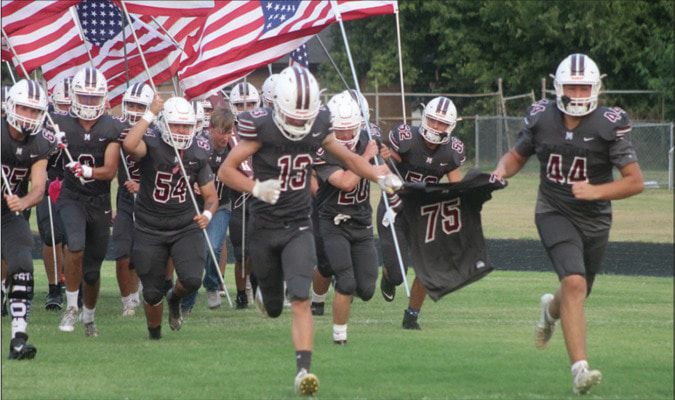 The Maroons fell to 0-2 on Sept.10 when they lost their home opener to Stigler (3-0) 41-0. The game was scoreless for most of the first half and the Maroons had a time-consuming first quarter drive but with 2:36 left before halftime, Stigler would get two quick scores and it was 13-0 at the half.

“We need to clean up our errors and assignments, our inexperience on defense and a couple of blown defensive assignments gave Stigler some easy scores,” said Maroons Head Coach Brent Parker. Christian Mora carried the workload on offense with 90-yards rushing and led the defense with nine tackles. Parker also identified JD McCleary, Peyton Jones, Colby Looper, and Matt Davis for their strong line play so far this season. Stigler would rush for 291 yards on 32 carries and another 122 yards in the passing game.

The Maroons defense ran into a tough runner in Tanner Mobley who scored four times and rushed for 171 yards on 15 carries. The task does not get any easier this week as Kay County rival Tonkawa Buccaneers come to town Friday night for a 7 p.m. kickoff. The Bucs lost to Perry last week 13-12 and are 1-1 in the early season. The Bucs will be led on offense by quarterback Ryan Morgan with help from Noah Campbell and Jaiden Guzman.

Bucs Head Coach Mike Kirtley told the Blackwell Journal Tribune earlier this fall that he is also looking for help from Luke Shepherd, Kai Day, Jake Randall on both sides of the ball. “We will be a running team first and pass second. We want to control the ball and control the clock,” said Kirtley. Kick-off is 7 p.m.