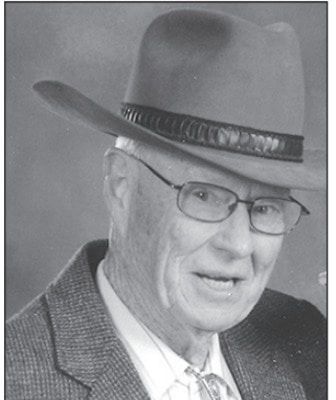 Leonard, who passed away on Sept. 14, 2021, was born in Blackwell, Oklahoma, on July 5, 1931, to Hattie and Clyde Baylor. They divorced when he was less than a year old. Then his mother took a job keeping house for Frank Garnet, a farmer who had lost his wife and had a 13 yearold son.

Len liked the farm. He had a dog, and a pony that he later rode to Low Center School. He learned to fish and trap. He caught mink, silver muskrat, rabbits and other animals, and sold the pelts at the local feed store in Braman, Oklahoma. He also delivered the paper to a neighbor and earned 25 cents a week. This helped him buy his books and school clothing. His mother and Frank both taught him good work ethics. Walter, Frank’s son, was like an older brother. It was special to do things with Walter. Walter took him to Sunday School, and he accepted Christ as his Savior at the United Methodist Church in Braman, Oklahoma.

When he was 14 years old, his mother bought a house in Braman, for taxes with the money she had earned from the cattle Frank had paid her with. He attended high school in Braman and lettered in basketball. At 17 years old, he had graduated from high school, and a friend came by and asked him if he would like to go to work with him. He did, but when he got to Powell Plumbing in Blackwell, Oklahoma, and asked C.A. Powell for a job, C.A. said “No. I don’t have any work for you, unless you want to dig ditches.”

So he dug ditches for two years, then they let him plumb his first house. In the evenings he had enrolled in the International Correspondence Plumbing course, which he had found in a magazine, and was studying hard for his journeyman license, which he earned.

On Aug. 22, 1953, he married Elsie Hamilton of Arkansas City, Kansas, who he had met roller-skating in Newkirk, Oklahoma. In 1954, he was drafted into the U.S. Army and spent his basic training at Fort Bliss, near El Paso, Texas. From there he went to Fort Monmouth, New Jersey, and Signal School.

Elsie followed him and their son was born there. Then he was assigned to the “Far East,” which being during the Korean Conflict we thought Korea, but it turned out to be Hawaii. There he spent a lot of time with 35 others in an underground tunnel, sending and receiving messages. He was discharged in 1956, and went to work for the City of Blackwell, in their power plant, where he started studying “steam.” Our baby girl was born there in 1957. In 1959, he took a job in southwestern Oklahoma at Altus Air Base.

Then an offer came to go to Alaska and do the plumbing and heating on a new church and Christian Center, being built by the American Baptist Home Mission Society in Cordova. During their days off, the men enjoyed hunting and fishing. In 2019, 53 years later, we were able to go back and visit! After the job was finished, he worked for PNA (Pacific Northern Airlines) and we took advantage of traveling “space available.”

In 1966, he applied with Boeing in Renton, Washington, and they moved us to Seattle. Remember in 1969 when they had the big layoff and asked that the last one in Seattle “turn off the lights?” He was laid off, then hired back, then laid off again. Then he worked at the Ballard Hospital for a year. He had applied at the Port of Seattle and was hired as a plumber and steam engineer at SeaTac airport.

He retired in 1995. In 1980, we were on our Motto Guzzi motorcycle, looking the country over, and found the Methow Valley. Mt. St. Helens had just blown, and we really wanted to see Yakima, but the ash was too thick, and the road was closed, so we purchased this little piece of land on the Methow River. Len loved it! Sitting on the patio, watching the doe with her two fawns, and the turkeys and the quail!

From 2004 to 2018, we volunteered with Wycliffe Bible Translator’s Mexico Center, Catalina, Arizona. Len was preceded in death by his mother, father and son Barney Owen. He is survived by his wife Elsie, at home, daughter Marilyn Baylor, grandson Miles Milliken, all of Carlton.

A memorial is being planned after we hear from his coworkers on the west side. Donations may be made to Care Net, or the charity of your choice.