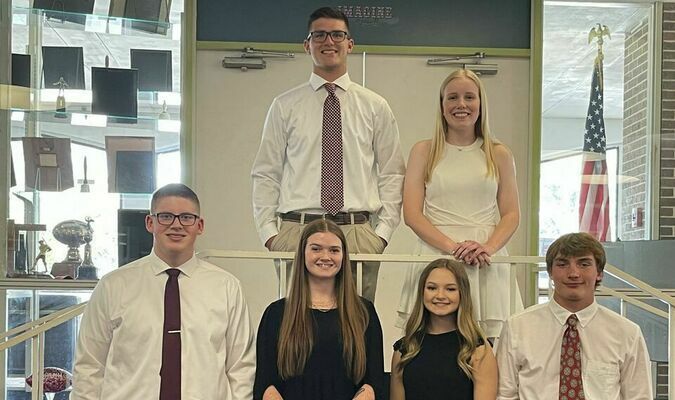 Hail to the white. Hail to Maroon.

Last week, Blackwell High School officials announced the names of the students who earned the titles of Maroon Spirit and Miss BHS ahead of the Oct. 8 Homecoming celebration.

The Maroon Spirit for 2021 is Matthew Clark Davis. Davis is the son of Angela and Chris Davis.

He is the grandson of Tom and Julene Tolle, Roger and Gale Clark, and Larry and Joyce Davis. Davis has attended Blackwell schools for his entire educational career.

He was also in the 2019 Honor Society. Davis is an active member of the Immanuel Baptist Church and served on a mission team in San Luis, Belize, with IBC in 2019. He actively participates as a drummer for his church, works with the praise team and helps in the church’s sound booth. He is also a classroom assistant in the life skills class.

After high school, Davis plans to attend Northern Oklahoma College to earn his process technology degree. He hopes to work as an operator in the oil and gas or energy industries.

Haskins is the daughter of Shawn and Amy Haskins.

She is the granddaughter of Gary and Diane Haskins, Jim and Penny Blackburn, and Robert and Mary Gray.

She attended Rush Springs schools for nine years and Blackwell schools for five years. She has also been enrolled at the Pioneer Technology Center for two years. Haskins has been on the Superintendent’s Honor Roll all throughout her high school career. She has been a member of the National Honor Society, Oklahoma Honor Society, National Technical Honor Society and the Youth Leadership Oklahoma Class of 2021.

She is also a two-year regional golf qualifier and placed in the Top 3 in the Kay Electric essay competition. She was selected as a Girl’s State Delegate and was chosen for the Pioneer Technology Center’s Wall of Fame in 2021. She was a volunteer at the local hospital prior to the coronavirus pandemic. She has participated in the Maroon Clean-up Day for three years as well as the city-wide clean-up in the spring. She has helped with the First Christian Church’s Vacation Bible School for two years, and she has served as a Student Council member for three years, including her role as executive vice president during her junior year.

She is a member of HOSA and served as a chaplain in the previous school year. She was a wrestling attendant for coronation during her sophomore and junior years. She plans to attend college and pursue a career in healthcare.

Runners-up for Maroon Spirit are Kahle Lambert and Christian Mora. Lambert is the son of Heath and Jennifer Lambert. He is the grandson of Mike and Karen Lambert and Dennis and Marscha Kahle.

He has attended Blackwell schools for his entire educational career. Kahle is the Student Council president and has served in Student Council for four years. He has been on the Superintendent’s Honor Roll all throughout his high school career and has maintained a 4.0 GPA. He was in the National Honor Society and the Oklahoma High School Honor Society. He earned the 2020-2021 ACT Award and was on the school’s academic team for three years.

Kahle played basketball for three years, baseball for two years and football for one year. He was a member of basketball royalty during his sophomore and junior years. Kahle is also a member of the Immanuel Baptist Church, where he helps operate the sound booth and assists with the church’s summer Bible school. He is a volunteer for BHS blood drives and is a volunteer for all of the Maroon Pride campus clean-up operations.

After high school, he plans to attend Oklahoma State University to pursue a degree in engineering.

Mora is the son of Jorge Mora and Joy Mora, and he is the grandson of Jeff Hightower and Karen Hightower.

Mora was a member of football royalty during his sophomore and junior years, and he is the sergeant-at-arms for the Student Council. After graduating, he plans to go to a university and get a degree in business. '

Tripp is the daughter of William and Mindy Tripp.

She is a member of the National Honor Society, the Oklahoma Honor Society and the Gifted and Talented Students Program. She has also volunteered for various church activities. After graduation, Tripp plans to attend Wichita State University or the University of Central Oklahoma to earn a bachelor’s degree in nursing.

She volunteered at the Tulsa Dream Center this summer. After graduating, she plans to pursue a career in the medical field.