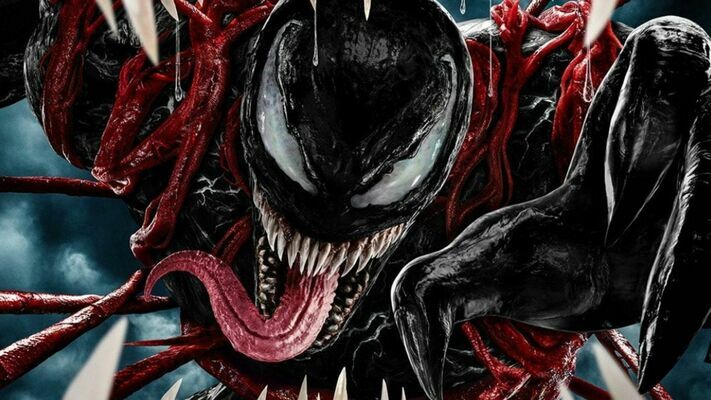 “Responsibility is for the mediocre.”

When Sony Pictures VENOM dropped in 2018 to awful reviews and a massive haul of $800 million dollars with a sick sequel hook, it was inevitable that Sony would pursue a sequel.

Factoring in a global pandemic and several shifted release dates, no one could have possibly seen that VENOM: LET THERE BE CARNAGE would not only open with a bigger opening weekend but open as a somehow MORE gonzo, MORE thrilling, MORE hilarious entry in the saga of this big, black, alien menace.

VENOM: LET THERE BE CARNAGE puts Eddie Brock (Tom Hardy) and his symbiotic alien, Venom, on a collision course with escaped serial killer Cletus Kasady (Woody Harrelson) who has his own symbiotic-the crimson psychopath Carnage- and his super-powered girlfriend Shriek (Naomie Harris) .

Of course, before they can save the day, Eddie and Venom have to do a little bit of growing up first. Eddie’s ex-girlfriend Anne (Michelle Williams) is getting married and Venom is going a bit stir-crazy, feeling weighed down by Eddie. Can this dysfunctional dynamic duo overcome their own struggles and work as one, cohesive, super hero?

In my 2018 review of the first VENOM, I wrote that “VENOM is full of faults- is it particularly “good”? Not really. is it fun as Hell? Absolutely. Everything in this movie is so ridiculous, so exciting, that it demands to be witnessed.”

VENOM 2 is, quite frankly, the most bonkers film I have ever seen.

Imagine you get into a sports car with a maniac who’s absolutely gonked out of his mind on a 2-day cocaine bender, and he’s driving 100 mph weaving in and out of traffic, and the entire time he’s just screaming nonsense at you until he pulls over and grabs a 12 pack of Red Bull and a gallon of vodka and he’s dumping both down your throat while he changes the radio station every time a song starts until, finally, he crashes through the guard rail and into a candy store run by monkeys.

You get knocked out, and you wake up covered in Red Bull, alcohol, candy, and you have a concussion. You wonder if it even happened at all. And no one believes you.

That's what seeing VENOM: LET THERE BE CARNAGE is like. It is a breakneck 90-minute thrill ride of camp and pure bliss.

This installment is directed by actor-turned-director Andy Serkis, who is arguably best known for his stunning motion-capture performance as Gollum in Peter Jackson’s “Lord of the Rings” trilogy and Caesar the ape in the “Planet of the Apes” trilogy that ran from 2011-2017. Serkis was hand-picked by star Tom Hardy, who is credited as a writer this go-around.

The film opens with Cletus Kassady in an abusive, prison-like boarding school where he falls in love with Frances Barrison, a girl who can scream at ear-shattering decibels and this sets the stage for a film that, under the CGI mayhem of two monsters fighting, is about love and making relationships work.

The two main weaknesses of the symbiotes are sound and fire, and for Cletus/Carnage to co-exist with Shriek he must accept that her power is something that can kill him. Similarly, Venom is a creature that sucks the life out of- and kills- his hosts, sans Eddie who he achieved a perfect (in theory) symbiosis with.

Carnage cannot accept Shriek for her powers, while Eddie cannot initially accept Venom for his desire to feed on brains and bad guys, leading to the two’s fight in the first half of the film which culminates in him going on a "night out" where, at a rave, the real "odd couple" tones really take off and Venom basically declares that he's ready to mingle and "Out of the Eddie closet" wanting to be with someone who isn't afraid of him and hides him.

This scene is hilarious for the sheer absurdity of Venom wearing glowstick necklaces, but it also is - in some ways - a but of a "good for you" moment.

If you loved the first VENOM, you’ll love this. Simple as that. If you didn’t, you’ll hate it. It’s a hilarious film that has absolutely no qualms about being unabashedly “bad” and corny. It’s a film that knows what it is, and is so blatantly unconcerned with being high-brow that you can almost see the actors laughing at themselves as they ham it up. Every character is over-the-top, and every actor gets their chance to be absolutely wacko, especially Harrelson who snarls and laughs and sings with absolute glee.

The real selling point though, is the film’s credit scene. I won’t spoil it here, but the people in my screening were literally clapping and cheering. It’s one for the record books.

VENOM: LET THERE BE CARNAGE is playing in Tonkawa at The Hub, the Carmike in Stillwater, and at the Cowley Cinema 8 in Winfield and is rated PG-13.