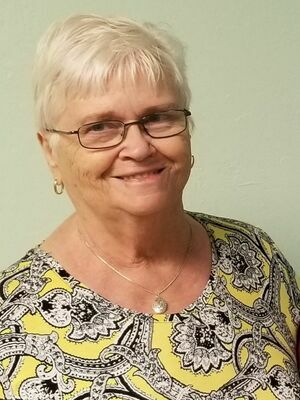 Glenda (Mills) Chambers was called home to be with her Lord and Savior on October 6, 2021, at the age of 78 years after a lengthy battle with Dementia. She was surrounded by her loving children and caring Hospice nurse Mitch as Angels welcomed her into their arms at the Hillcrest Manor Nursing Home in Blackwell, Oklahoma.

Glenda was born on January 14, 1943, in Ponca City, Oklahoma. The second daughter of Ivan Edward Buxton and Annie Ruth (Gabbert) Buxton. She would spend her childhood and teen years in Ponca City, OK and Uncas, OK.

She met the love of her life, William Boyd Chambers, on a blind date set up by her best friend Martha, who also happened to be Boyd's sister. They ran off to Stillwater, OK and married on April 1, 1961, surrounded only by their closest friends They made their home in Ponca City, OK until Glenda finished High school, graduating with the class of 1961. After moving to Stillwater and Tulsa, the young couple settled in Blackwell, OK where they would start the family business Chambers Carpet Service and raise their family. Together their union would be blessed with 4 children: Tammie Lynn, Sherrie Lynn, DeWayne Edward, and William Boyd, known to family and friends simply as Bill.

Glenda enjoyed sewing for her family and happily made dresses for her girls and shirts for her boys. She loved traveling and was able to visit several states with Boyd on his Gold Wing motorcycle. One of her favorite things to do was attending and watching her children’s sporting events. She loved being a sponsor for many of her kids events they attended. Glenda was an avid bowler and bowled on mixed and ladies league teams for many years. One of her most cherished memories was winning 1st place Class C Doubles during a bowling tournament with her daughter Sherrie in 1985. While raising her children, she would work outside the home at St. Joseph’s Hospital in Ponca City, OK, Wal-Mart in Blackwell, OK and as a tool pusher at United Fabricators in Blackwell, OK. Her loving and most trusted friend, who she also called her husband, Boyd, preceded her in death on January 21, 1989.

Glenda would marry Donald Keith Mills on August 10, 1989, in Blackwell, Oklahoma and they would continue to make their home in Blackwell, OK During this union, Glenda would work at Dean's Pools and Spas, and the Blackwell Hospital. The couple made a move to Blackwell Lake to enjoy fishing and sunsets, before moving to Burbank, OK. Glenda was now working at Sykes in Ponca City, OK. She would retire from Sykes Enterprise in 2008, but not before receiving an award from the Osha account she worked on. Sykes would fly her to Chicago, IL to be presented with the prestigious award. While In Burbank, she also served on the Election Board and raised Boston Terriers. She adored her terriers Baby Girl, Boots, and Candy. In January of 2017, due to her failing health, Glenda would return to Ponca City to be closer to family. Don preceded her in death on August 26, 2018.

One of the highlights of Glenda’s life was being able to share her bonus from the Osha award with her family in 2005, she surprised the entire family ….3 of her children and their spouses, and all 10 of her grandchildren with a trip of a lifetime. They took a road trip and traveled to Los Angeles, CA, and Disneyland Park. So many great memories would be made on that journey. Stories of the adventures continue to this day, as photos are often shared with family and friends. It was an amazing gift that Glenda gave to her children and grandchildren, as she was so proud of her family.

Glenda’s family would like to thank Humanity Hospice for taking such loving care of their loved one when they could not be there, and they would also like to send out a special thank you to her very caring and loving nurse Mitch.

Funeral services will be held at 10:00 a.m. on Wednesday, October 13, 2021, in the Roberts and Son Funeral Home Chapel Burial will follow in Blackwell Cemetery

Memorial contributions may be made to the Alzheimer’s Association, sent in c/o Roberts and Son Funeral Home, 120 W. Padon Ave, Blackwell, Oklahoma 74631.