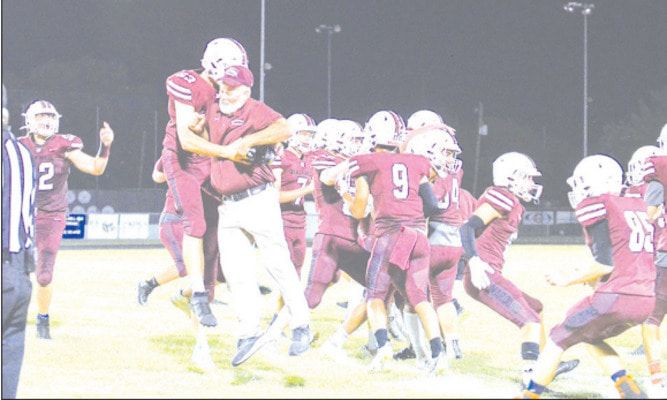 The Blackwell Maroons football team won their 2021 Homecoming game on Oct. 8 by a score of 21-2.

It was the Maroons first win of the season. Hennessey took an early 2-0 lead when Kruz Goff got tackled in the endzone for a safety and a 2-0 lead.

Goff would bounce back with a 26-yard run in the second quarter and senior Christian Mora would kick the extra point and it was 7-2 at the half.

There was no scoring in the third quarter and Goff would seal the deal with two fourth quarter three-yard runs and a two-point conversion by Goff for the 21-2 win. The Maroons would have 14 first downs in the game compared to 11 for the visiting Eagles.

The Maroons ran the ball 38-times for 160 yards and had 42 yards passing with a 6-for-9 effort by Goff with no interceptions for 202 total yards of offense. The Eagles (3-3,1-2) would end up with 214 yards in total offense but also lost two fumbles for the only turnovers of the game. It will be a short week for the Maroons (1-5,1-2) because of fall break.

OCs meanwhile ran for 178 yards and passed for another 136 yards for 314 yards in total offense. OCS had two turnovers to the Tigers one turnover. It is a rivalry game so anything cam happen. Kickoff is 7 p.m.