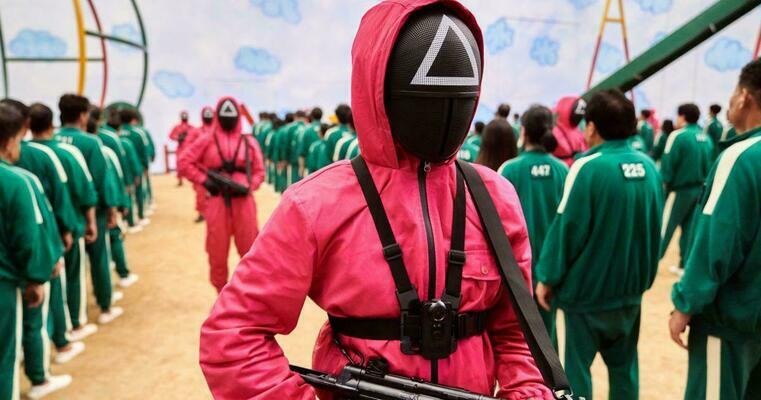 It’s all anyone is talking about.

You’ve seen the memes of the robot-girl, the people in green track-suits, the people ink pink jumpsuits with shapes on their masks and guns.

This is “Squid Game”, Netflix’s wildly successful Korean drama that has become one of the site’s biggest TV premieres following last year’s “Bridgerton”.

The hook is simple, people up to their eyeballs in debt are given the chance to win over $45 million Won (Korean currency which translates to roughly $38 million USD) by allowing themselves to be captured and taken to a mysterious island where they play children’s schoolyard games with a fatal twist as they compete to be the last person standing and take home the heaps of cash.

“Squid Game” is a fairly innocent show, a 9-hour drama which slogs more than it thrills, with some absolutely entry-level ruminations like about how money makes us monsters and how you can’t trust anyone, and writing about as innovative as your typical TV cop-show procedural with paper-thin characters like “downtrodden burnout with a heart of gold”, “innocent doe-eyed foreigner”, “big tough mob guy who’s actually a wimp”, “quiet girl with sad back story”, and so-on, even down to a completely asinine sibling-twist that feels like it was made up for the hell of it.

Does “people dying for money at the amusement of others” sound familiar? It should.

“Game show with a deathly twist” has been a mainstay in culture since Richard Connell’s short-story “The Most Dangerous Game” in the 1920’s, with fiction like “The Running Man”, “Battle Royale”, “GAMER”, “Death Race”, “The Long Walk”, “The Hunger Games”, and “The Condemned” all capitalizing in their own ways on the trope.

What “Squid Game” lacks in innovation from a story-telling standpoint, it makes up for at least in production values and performances.

The show is colorful and wacky-looking, which gives it a certain haunting contrast, like being trapped in a hellish candy store. The "children's play-room" quality of the game compound is nightmarish and an absolute joy to look at, with stand-outs like the pop-colored M.C. Escher stairway and the Game Master's reflective hall-of-mirrors like suite he watches over the games from.

Despite the script's trappings, the series is saved by dedicated and absorbing performances lead by Lee Jung-jae as Seong Gi-hun, with supporting roles populated by Park Hae-soo as Cho Sang-woo, the elderly O Yeong-su as Oh ll-name, and soon-to-be-breakout star Jung Ho-yeon as Kang Sae-byeok.

“Squid Game”, however, makes the mistake of thinking it is more clever than it really is, and there’s a B-plot involving a Korean police officer infiltrating the game that isn’t nearly as gripping as it should be.

The show’s most jarring element is the scenes of the Game Master (Lee Byung-hun, famous for his role as Storm Shadow in the G.I. Joe movies) and the “VIPs” (Illuminati-like sinister businessmen) who visit the island to oversee the carnage.

These scenes are spoken in “English” and the writing and acting is jarring. These people talk like they’re speaking through Google Translate, and the dialogue is hokey and eye-rolling.

I don’t necessarily blame the writer/director (Hwang Dong-hyuk) for this because it is impressive that he managed to concoct all this independently, but I don’t think it would have hurt for him to just have them speak Korean. The final episodes have any and all tension and drama sucked from them like a vaccum during the scenes with these “American” speaking characters. I suppose, though, is this what it's like when foreigners watch American films that do the same thing?

“Squid Game” isn’t awful, per se, it’s just not as good as people rave it to be. There are great scenes, such as the glass bridge, the marble games, and the final “1 v 1” deathmatch, but the pacing slows to an absolute crawl and confuses “dull exposition” for “talking drama” as it attempts to mimic, say, “Game of Thrones”.

While I’ve seen people claiming it’s a must-see for the “epic violence”, referring specifically to the now-iconic game of “Red light, Green light”, there isn’t really much to be had or gawked at.

“Squid Game” is “family-friendly” violence that was no doubt done at the behest of Netflix to make it more marketable. There’s a lot of blood-squibs, but not a lot of gore. No matter how people die, they end up on the floor covered in blood. That’s it.

It might sound like I’m a sadist for wanting to show to be more graphic and hardcore, but when this concept has been visited by ultra-violent fare like 2009’s forgotten GAMER or BATTLE ROYALE, it just comes as another knock against “Squid Game” for having nothing to really set itself apart.

This, it seems, is an overarching problem with most Netflix original programing. There are outliers, sure. Dramas like "Ozark" or "Stranger Things" and even parts of "The Witcher", but Netflix just cannot seem to get their formula right. It is almost like these programs are made in a laboratory with special protocols in place to make the safest, most by-the-numbers programming imaginable.

Here's to hoping that this show can truly up the ante for the inevitable season 2.

All 9 episodes of "Squid Game" are available now on Netflix.