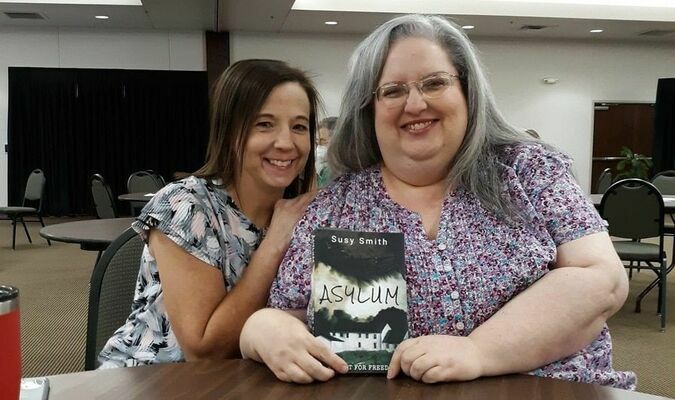 It is a time of great upheaval in the United States. The “Big Crash” has thrown the U.S. into disarray as the president declares martial law. Citizens are rounded up and locked away, never to be heard from again. Now, a band of revolutionaries tucked away in Oklahoma prepares to make a stand.

This is the fictional stage that Blackwell author Susy Smith’s debut novel, “Asylum,” is set upon.

Published by Balkan Press and released in August, Smith’s novel has a five-star rating on Amazon and GoodReads. It’s the fruit of more than eight years of creative labor.

Born in West Covina, California, Smith moved to Oklahoma with her family when she was an infant. Her parents built their home in Kaw City, and Smith attended school in Shidler before moving to Blackwell in the early 1990s.

While her novel seems ripped from the headlines, Smith said it wasn’t meant to be a “political” book, but rather one of survival, choices and growth.

“The world is in upheaval after the Big Crash,” Smith explained. “In Oklahoma, the National Guard is rounding up citizens and putting them into work camps. The cast of characters find refuge at Lacy’s uncle’s farm, and the story begins there.

“It all comes from speculating on what the world would be like if our economy crashed and we were left with nothing that we’ve depended on, like the internet, grocery stores, gas. … Would you survive that? Do you know anything about, say, growing your own food or keeping yourself warm in the winter because the propane tank is empty and there’s no one to refill it?”

In “Asylum,” Lacy Monroe is barely out of high school. She has never considered herself a leader. But then the economic crash cripples the entire infrastructure of the country. When the rest of her family flees, she remains on the farm, the last piece of land in the state holding out against the hostile government.

Alone and vulnerable, Monroe endures a horrific attack and survives to offer sanctuary to others who seek it – until an old face from the past shows up at her door and turns her world upside down.

Enter Jace Cooper, who has harbored a secret for years: He is in love with his best friend’s sister. The world is crumbling around them, and no one knows how long they will survive. All he wants is to protect Lacy and stay with her.

With the National Guard circling ever closer, hunger and sickness are taking a toll on people. Betrayal and jealousy threaten to destroy the group from the inside, and the struggle to hold onto the farm pushes them to the brink – all while Lacy is keeping a secret so devastating that it could drive Jace to unthinkable actions. Is the farm a safe asylum – or will the fight for freedom destroy them?

“The story is set in Osage County, right outside of Shidler,” Smith said. “My grandparents owned 40 acres out there. I spent a lot of my childhood there, so that’s where the story is set.

“I may have taken liberties using some last names that have been in that area for generations, but there’s no one from Shidler or Kaw City that I’ve based my characters on directly. There is, however, a particular relationship dynamic that bears some resemblance to ‘real life,’ but I’m not going to reveal what that relationship is.”

Smith said she has always loved writing, and she has dreamed about writing her own novel since she was 16.

“Asylum” began in 2013 as an almost unrecognizable first draft. Four drafts later, Smith lamented that the editing process is endless.

“You never feel like you’re finished,” she said. “Even now, I pick up the completed, finished novel and pick it apart. I really cut my teeth learning to write on this book, and it’s been a wild ride.”

“Find a person who will read your work as you go, just like a professor would,” she said. “Buy that person red ink pens and say, ‘Do your worst.’ Then, grow some very thick skin. If you want to better yourself, your writing, you have to accept criticism. If you don’t agree with your critic, kick it around a while. More likely than not, you’ll come around to their way of thinking.”

Smith already is working on the sequel to “Asylum,” tentatively titled “Leverage.” Also, a prequel is in development, along with a paranormal romance novel, Smith said.

Smith recently was invited as a featured alumna to speak at Northern Oklahoma College’s Chikaskia Literary Festival, where she read the first chapter of her novel to the crowd.