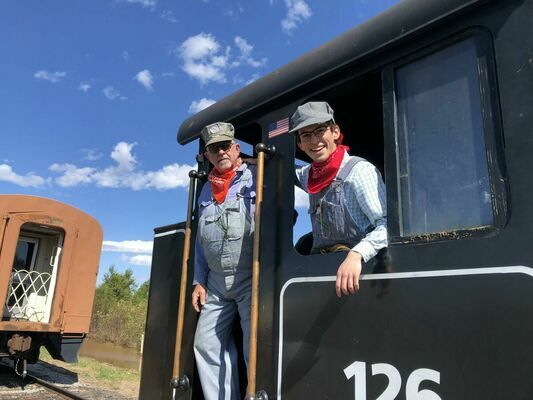 A couple of weeks ago, I heard an old phrase for the first time: “Bob’s your uncle.”

Across the pond in Europe, it’s a saying that means, “It’s as simple as that.” It dates back to the late 1800s, when a man was appointed to a prominent political position by his uncle, Robert Gascoyne-Cecil, Britain’s prime minister. Getting the appointment was easy because of his uncle’s influence. And thus the phrase was born.

Much like the nephew in the story, I too have an Uncle Bob – and he too has an awesome influence in my life and the lives of others.

Robert M. Lynch and I aren’t related by blood, but we’re family just the same. Since 2017, we’ve fixed up old tractors, worked on our farms and operated railroad locomotives together.

That’s what we did Friday afternoon. Dressed in black-and-white overalls, donning railroad engineer hats and carrying our pocket watches, we drove to the Oklahoma Railway Museum in Oklahoma City to operate a vintage steam engine.

The locomotive is owned by an Indiana company that takes it around the country to railroad museums, where train lovers like Uncle Bob and I can spend a little time at the throttle. Engineers at the museums teach people how to operate the locomotive, giving them a chance to try their hands at railroading the old-fashioned way.

But Uncle Bob didn’t need any training (no pun intended). After all, this wasn’t his first time engineering a steam locomotive. Far from it. He used to operate one at a tractor show in Pawnee, and he’s even had a little time in the cab of two of the nation’s most historic steam locomotives: Frisco Railway No. 1522 and Union Pacific No. 844.

He was a natural when he climbed in the cab of the Lehigh Valley Coal Co.’s venerable steam engine, named “Sadie,” on Friday. He took her down the tracks ever so gently, letting out a long, mellifluous blow on the fine-tuned whistle as the engine trundled along.

Once Uncle Bob’s time at the throttle was up, it was my turn. Typically, one of the museum’s engineers would have shown me how to release the brakes, grip the throttle and let the engine run down the rails. But the museum crew knew Uncle Bob could run the engine well – and they let him teach me how to handle a steam engine for the very first time.

Riding a steam engine is good. Engineering one is better. And learning how to engineer one from someone you love? That’s the best.

Uncle Bob gave me a valuable education that day, and he’s taught me a whole lot more than how to run a locomotive. Sure, he’s shown me how to work on tractors. But the way he lives his life is the greatest lesson of all.

Uncle Bob isn’t a Jack-of-all-trades. He’s a Bob-of-all trades. He’s had a number of careers in his life, and he’s made them his own. This year marks his 50th year as a volunteer firefighter. And for all of his life, he’s been a farmer and a mechanic, among other occupations. If anyone embodies what it means to have a good work ethic, it’s him.

He’s humble about his work, too. He doesn’t boast about his top-notch welding ability. He’s not prideful about his remarkable bass singing voice. He’s never bragged about the lives he’s saved in his time in law enforcement and firefighting. He uses his talents and gifts in ways that help other folks; forget about ego.

Most of all, he shows kindness to everyone around him – a trait we need so much more of in this world. Whenever I need advice, he gives sage wisdom and discernment, just as he does for everyone else in the family. Luckily, I’m not his only “adopted” nephew; countless other folks call him “Uncle Bob.” To all of us, he’s an ear to listen, a shoulder to cry on and a heart to love. That’s the perfect combination.

He once told me that all he could ever want to do is make a difference in the lives of others. If I haven’t already made clear that he has, let me reaffirm it. Without Uncle Bob, I wouldn’t be the man I am today – and the lives of so many other folks wouldn’t be nearly as full as they are.

As I think about the phrase “Bob’s your uncle,” I can’t help but be happy. Bob’s my uncle, and I wish everyone had an Uncle Bob.