Review: DUNE is a weird, scary, and biblical space epic 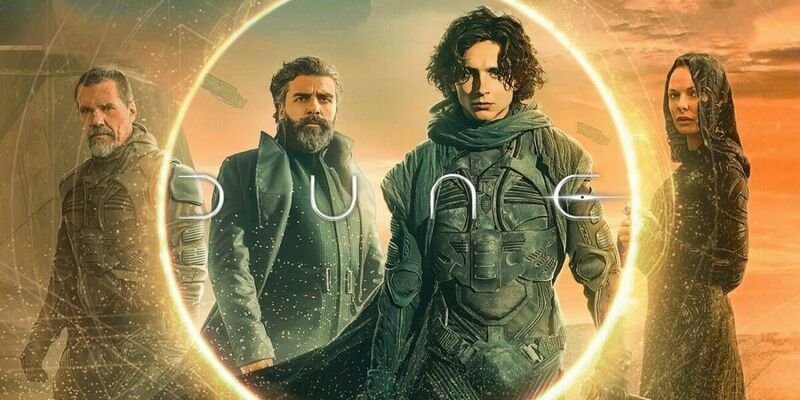 "A great man does not seek to lead; he is called to it.”

This weekend saw the long-awaited release of Denis Villenueve’s grandiose, star-studded, adaptation of Frank Herbert’s seminal 1965 novel DUNE in theaters and on the HBO Max streaming service. Surviving the COVID-19 pandemic, WB’s two-and-a-half-hour blockbuster is well worth the wait.

In the distant future, the year 10,191, control of the barren desert planet Arrakis is given to space-faring House Atreides by the Galactic Imperium. Duke Leto Atreides (Oscar Isaac) and his family are to serve as the fief rulers of this harsh desert hellscape which, we’re told, is the only planet in the galaxy that contains a substance called melange- or “spice”- which is used to extend human vitality and is a crucial component in deep-space travel.

Duke’s son, Paul (Timothee Chalamet) is plagued by visions of the planet well before his family’s arrival. In his dreams, he sees a woman with glowing blue eyes who beckons to him. Paul is struggling to control the budding powers that he has inherited from his mother Jessica, a space witch and member of the secretive coven called the Bene Gesserit.

Upon arriving on Arrakis, Paul’s family is attacked by the planet’s previous rulers, the savage House Harkonnen. The house has aligned itself with a terrifying military force called the Sardaukar, and won’t stop until House Atreides is wiped out and Arrakis- DUNE- is theirs to control. He who controls the spice controls the universe.

Now, Paul must journey into the desert with his mother to seek out the planet’s natives, the Fremen, and prepare for a battle that could change the entire course of the galaxy.

DUNE is a biblical science fiction tome that has a dictionary-sized glossary of cults, planets, religions, powers, characters, and politics that all come into play. The good news is that the film, written by John Spaihts (Prometheus, Doctor Strange), Eric Roth (Benjamin Button, A Star is Born), and Villenueve himself is welcoming to newcomers who might find the universe too daunting to comprehend at a glance.

This nearly 3-hour epic is beautifully shot and, only in parts, does it actually feel as long as it is. Villenueve is no stranger to visually captivating “adult films”, helming recent jaw-droppers like 2017’s BLADE RUNNER 2049 and 2016’s ARRIVAL and while the film is certainly denser than the former and not as “humane” as the latter, DUNE is a shamelessly weird sci-fi odyssey.

This film feels like you’re cracking open a rich novel, sinking into a hot bath, and becoming almost delirious as the heat and the material swirl around in your mind, drifting in and out of consciousness as you have a waking fever-dream of sun-capped sand dunes, gargantuan space worms, terrifying enemies, mystifying cultures, and larger-than-life heroes.

The music in DUNE adds another layer to a truly immersive film. Hans Zimmer, one of cinema’s most in-demand composers, blends bagpipes, tribal wailing, Gregorian throat-chanting, and his usual earth-shattering bass to swallow you whole, much like the film’s iconic sandworms.

DUNE is a weird movie. It is a completely, shamelessly, “hard science fiction” film. It does not hold your hand, and it does not make concessions.

Chalamet, a commanding presence as Paul, continues to evolve as a leading man from his small (but profoundly dense) resume and here he shares the lead screen-time with Rebecca Ferguson who plays his mother, Jessica. Ferguson is filled with a quiet rage the entire time, and she demands to be seen here in the film. She is a knock-out, simmering with emotional tension.

Also starring is the go-to heartthrob Jason Momoa as the wise-cracking warrior Duncan Idaho along with the battle-hardened Gurney Halleck played by Josh Brolin. Javier Bardem has a surprising role here as well, and he gives a weathered turn here that is substantial in how reserved it is.

DUNE demands to be seen on the big screen, and it sets the stage for a DUNE: PART TWO that promises to, somehow, be even better than this first installment.