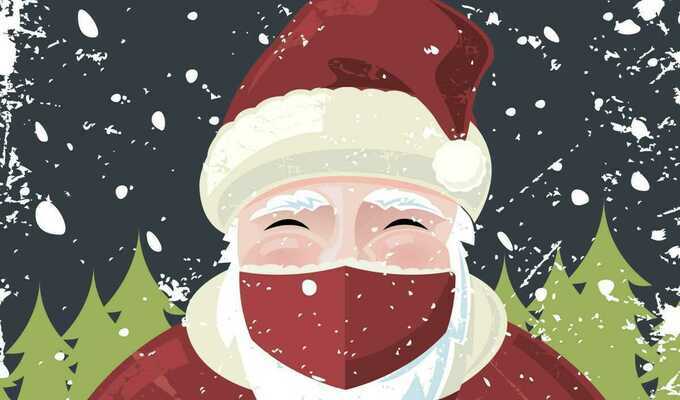 Christmas may be coming to town, but could Santa’s sleigh be nearly empty this year?

We’ve all heard about how supply chain delays could put a damper on Christmas gift-giving. But what happens if those issues spread to the North Pole?

Let’s take a satirical look. If you’re like me, you’re probably not too concerned about Santa anyway this year, nor were you in a prepandemic year.

Because if you’ve spent your own money buying Christmas gifts for other folks, you know that nothing winds up under the tree for free. And the price to put stuff there is getting even further from “free.”

The stack of gifts your toy train will have to make laps around will likely be smaller and more expensive than it was last year. If the cat knocks the train off the tracks, the Christmas gift supply chain will officially be derailed. With all that’s happening, it’d be easy to feel a little “bah-humbug” this year.

But for those of you who don’t celebrate Christmas because it’s been too commercialized in the past, you have no excuse to be negative this year – because there is nothing to be commercialized. Everything is sold out. Nobody has anything to advertise. Even the guy who could sell an icebox to an Eskimo, as the old joke goes, is probably glad he has plenty of ice around him, because he certainly has no boxes.

Maybe this is the Christmas we just say “screw it” to gifts. Or “Scrooge it.” That geezer certainly didn’t give any gifts. At least, not until he realized there’s more to life than being greedy. That’s a point for another day. Hopefully you’ve already learned that lesson – or will at least learn it without being visited by three spirits.

I hope the only spirits you see this Christmas come in a bottle. (And if you do get those spirited visits, stay home. There was no room at the inn for Mary, Joseph and Jesus, and thanks to COVID, there is no room at the hospital for you.)

But by the same token, remember not to bottle anything up this Christmas. Maybe this is the year we’ll have meaningful conversations and develop close connections with others rather than prioritizing materialism. We may not have physical gifts this year, so hopefully we can focus on spending quality time with our loved ones. And our fives, tens, twenties, fifties and all the other cash we’ll save by forgoing gifts.

The idea of giving gifts this Christmas? Figuratively speaking, that ship has sailed. Because literally speaking, the ship those gifts are on won’t be at port until November – next November.

Boats are backed up off the coast of California and are frozen in place at the North Pole. At least we have the Ghost of Christmas Past to remind us of when we could all swap stockings full of great stuff. Thrilling gifts like chicken-shaped marshmallows, which may not taste good at all, but at least they never go out of date because they’re completely artificial. They’re the gifts that keep on giving. Or how about fruit cake? Same principle, and you could call the people who gave it to you “fruity” and “nutty.”

(Which they are. Who would actually give that stuff in a situation outside of a Dirty Santa grab-bag? Reused items are acceptable there, and fruit cake typically tastes like it’s been tasted and digested previously.)

The phrase “Dirty Santa” brings up another topic. Even if some folks were supposed to get gifts this year, I’d wager Santa will be covered in soot during this year’s deliveries. His sleigh will be filled with more lumps of coal than gifts.

That’s because people haven’t been nearly as nice as they should be. The anticoal lobby could really put a strain on Christmas, too, because coal is about the only thing a lot of folks are going to get this year. Of course, the coal industry has also been affected by economic slowdowns, even though demand is at an all-time high.

Miners are struggling to keep up with Santa’s last-minute requests for additional lumps. Just the other day, my dad got up in the middle of the night to get a cookie from the cookie jar, even though my mom told him the cookies were offlimits. Onto the naughty list he went. And he was doing so well this year. Oh well. Opportunity knocks once, but temptation, like trick-ortreaters, will wear out your door.

Jokes aside, this Christmas sure will be different. If you’ve still got last year’s leftover turkey buried at the bottom of the deep-freeze because you forgot about your grand plan to make it into sandwiches, you might think about getting it back out.

Because the price of a new turkey – if you can even find one – is nothing to gobble about.

But you know what? Who cares if we can’t give Christmas gifts this year? That’s not the real reason for the season. And the best gift we can have this year is spending time with good people, whether they’re our family or not. Best of all, they’re a whole lot cheaper than stuff from Amazon, and you don’t have to worry about them being stuck in a cargo container.

In most cases. But if your family is anything like mine, you can bet they’ll still arrive late. Let’s just hope they get there before Santa does. Nobody wants to show up to find out their lumps of coal beat them to the party. God bless you all, and Merry Christmas!