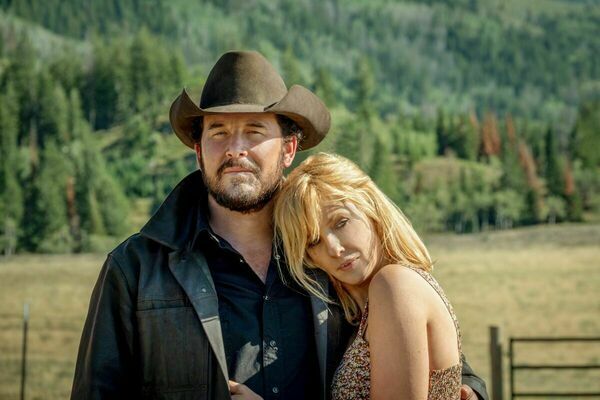 “What they did to John Dutton hasn't been done since they did it to us. We need to know who's trying to take his land because they're coming after ours next.”

TV’s most-watched drama returned last night with the 4th season of Paramount’s “Yellowstone” which offered a two-hour premiere to make up for the lengthy delay between S3 and S4 thanks to the pandemic.

It was, basically, the Super Bowl for Yellowstone fans.

Season 4’s first episode “Half the Money” picks up where 3’s cliffhanger finale left us back in the summer of 2020 with a calculated attack against John Dutton, Kayce, Monica and Tate, and Beth.

Kayce, with the help of his fellow law enforcement agents, chase down the men who gunned down his father in an intense, epic, fast-paced shootout as John is rushed by Rip to a nearby field to be air-lifted to a hospital for his multiple gunshot wounds. Beth is smoking (literally and figuratively) after a bombing, and Jamie is nowhere to be seen.

Now, one question remains: who carried out the attack on the Duttons? Was it Jamie? Was it the shadowy Market Equities financial group that wishes to turn rural Montana into an airport? Was it Thomas Rainwater and the Broken Rock Tribe?

During the action-packed and twisty premiere episode we also got a “teaser scene” of a grizzled Tim McGraw (yes, that Tim McGraw) as James Dutton (Grandfather to Kevin Costner’s character) in the snowy winter of the early 1880s as he and his two sons encounter a wayward tribe of Indigenous who seek to bury one of their elders.

It acts as an obvious teaser to the upcoming prequel series airing in December and also plants the seeds for an important plot point regarding the Dutton family’s relationship with the local Native Americans.

Back to Yellowstone, this season’s premiere carries some of the show’s worst and best qualities. The dialogue is fantastic as usual, and the direction is impeccable, making Yellowstone’s role as the 21st century “Dallas” (big-budget soap opera action) all the more valid.

The inclusion of a surrogate son to Rip and Beth (who, it was revealed, was rendered infertile by a botched abortion carried out by her brother) seems corny but it is done well enough that the audience can look past the “convenience” of it. Also, it appears seeds are being potentially planted for the bloodiest inter-family war yet as Kayce seems to sympathize with a now-rogue Jaime instead of taking Beth’s side in the assertion that Jaime ordered the hit.

Is Beth’s blind hatred finally leading her down a dark path that, it seems, has been hinted at for a while?

The one flaw in Season 4’s dual-episode premier is the careless way that a key villain is dealt with. Sure, it’s cool and a fun scene, but after such a snarling Season 3 role, Josh Holloway deserved a bit more of a send-off

Set up during the S4 premiere was the other spin-off in development, “6666”, which will follow the slowly-rehabilitated Jimmy as he travels the rodeo circuit with his annoying girlfriend as John Dutton tries to stake his claim in the world of buckles and broncos.

Also, where is Tate and Monica? Kayce’s girlfriend and son have been all but absent in Episode 2 which was jarring considering Tate killed a man (at the age of 10 he’s had it rough) and Monica has been adamant that she’s fed up with Kayce’s dangerous life.

“Yellowstone” airs every Sunday at 7 p.m. on the Paramount Network