Review: Yellowjackets is a terrifying survival-horror about teenage girls 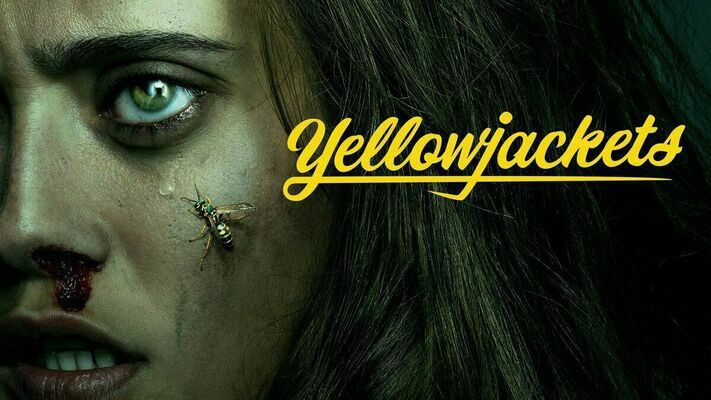 “After they rescued us...I lost my purpose.”

Bare feet race across the floor of a snow-covered forest. Desperate, panicked, gasps from a woman are heard echoing through the dead, frosty, trees. We see some of the bark is painted with disturbing eyes- the woods are watching.

Suddenly, the ground gives out from under her, and the woods go silent. The camera pans over to a pit-trap, filled with razor sharp wooden spikes. The woman’s body writhes and bleeds as the stakes have pierced her from head to toe.

Panning up from the disgusting mess of a corpse, two faded pink Converse shoes stand on the edge of the pit. Climbing up, the camera shows these shoes belong to a creature that seems to, at one point, have been a teenage girl. Her soccer hoodie stained and faded by dirt and dried blood and her face wrapped in a disturbing, almost ritualistic face-wrap that pokes out from a make-shift coat stitched together from various matted pelts.

This is our introduction to Showtime’s “Yellowjackets”, a series which tells of a New Jersey high school girls’ soccer team that crash-lands in the Canadian wilderness on their way to their national championship game in Seattle.

Stranded in the wilds for 19 months, the traveling team devolve into savagery, cannibalism, and barbaric mysticism.

In the present, the survivors of that tragedy slowly begin to realize that the past is coming back to haunt them.

The pilot episode for “Yellowjackets” aired this past Sunday, and stands as one of the finest hours of television I’ve ever seen. It is, without a doubt, one of the best pilot episodes since ABC’s groundbreaking drama “LOST” many moons ago.

Directed by Karyn Kusama, who already cut her teeth on gritty femme-fare with GIRLFIGHT and JENNIFER’S BODY, this series is disturbing horror wrapped with an alt-90’s bow that shows “Lord of the Flies” author William Golding’s assertion that women are too kind and nurturing to become the monsters that his cast of boys in the aforementioned novel become is completely dead wrong.

High school is Hell, especially for teenage girls. Especially by teenage girls. But what happens when the walls of society and the threat of punishment are taken away? Savagery. Hormonal lust, festering grudges, feminine rage. The all-encompasing and oppressive patriarchy of the modern world gives way to something potentially far more terrifying in the form of a ruthless matriarchy.

Bookish and meek Shauna is eager to break from her best friend Jackie’s shadow. In the 1990’s she’s played by the absorbing Sophie Nélisse, who made a name for herself in last year’s THE KID DETECTIVE. In the present, Melanie Lynskey (Perks of Being a Wallflower) portrays her. Both versions are nuanced, echoing the other’s insecurities and lust back and forth over 25 years.

Natalie is an acid-dropping, whiskey drinking, alt-girl who gives the middle finger to society’s expectations in the 90’s as presented by Sophie Thatcher and, in the present, is a hollow-eyed drug, sex, and alcohol addict fresh out of a stint in rehab played with a smoldering rage by Juliette Lewis (Natural Born Killers).

Misty is a “team manager”. She’s a frizzy-haired people-pleaser given a disturbing life by Sammi Hanratty in the 1990’s. One chilling scene, where she gleefully watches a rat drown in her family’s pool, sets up her transformation in the present as a vindictive nursing home nurse played by a peppy yet pestilent Christina Ricci.

These are only a handful of the players in “Yellowjackets”, and the first episode alone takes token teen norms that would be a staple of any Netflix or CW teenage drama (the driven team leader, the alternative girl, the ‘best friend’, the ‘weird one’) and gives them a frightening and completely believable nature.

“Yellowjackets” feels like something you aren’t supposed to be seeing. A glimpse through the keyhole into something horrific that no one should ever have to witness. The implications alone in the first episode send chills down your spine, and beg you to stay with the macabre promise of more.

This is the standard that mystery shows will aspire to stand next to in the future.

Much as HBO’s “True Detective” did in 2014, “Yellowjackets” aims to terrorize and titillate and, when it’s all said and done, to transform a genre.

This is must-see TV.