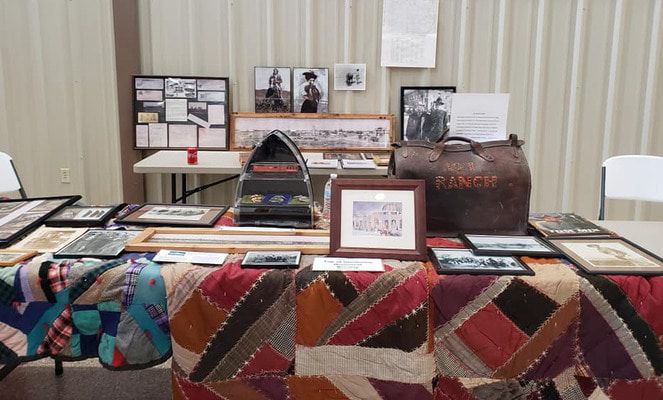 Cowboys and cowgirls of all ages can hitch their horses at the Blackwell Event Center on Friday and Saturday for the 101 Ranch Western Memorabilia Show.

The show will celebrate the history of Oklahoma’s 101 Ranch. The event will feature exhibits such as historic artifacts and antiques from the likes of Lucille Mulhall, Bill Pickett, Tom Mix and others.

Patrons will be able to view and purchase ranchstyle and western-style memorabilia, including firearms, cowboy gear, spurs, saddles, rare photos, posters, ephemera, books, artwork, coins and clothing. Museum pieces also will be on display. The show will be open Friday from 10 a.m. to 7 p.m. and Saturday from 9 a.m. to 4 p.m. Admission to the event will be $8 on Friday and $5 on Saturday. Children ages 12 and under can get in for free.

Tickets purchased on Friday will be good through Saturday. In 2019, the event welcomed more than 30 vendors and nine regional museums. Roughly 70 tables were scattered throughout the event center with merchandise and display pieces. The event was canceled in 2020 because of the coronavirus pandemic.

According to the Oklahoma Historical Society, the Miller Brothers 101 Ranch near Ponca City earned most of its fame and acclaim from its internationally renowned Wild West shows.

Beginning in 1905, when the owners invited members of the National Editorial Association to view the exhibition titled “Oklahoma’s Gala Day,” ranch-hands and Native American equestrian performers wowed audiences with their daring equestrian stunts and bull-riding feats.

The famous Apache warrior Geronimo worked with the show, which later featured Mulhall, Pickett and George Elser. In 1914, cowboys and Native Americans performed for King George V and Queen Mary of England.

The show went on the road in 1907, peaking from 1916 to 1925. In 1924, the show went on tour in Mexico, Canada, Europe and South America. Several entertainers with connections to the ranch, including Mix, Will Rogers, Jack Hoxie, Mabel Norman and Buck Jones, became Hollywood movie stars.

The show suffered with the onset of the Great Depression and World War II. Unable to compete with modern films and other attractions, the ranch shut down in the early 1930s. The expansive parcel of land that the show called “home” was later sold.