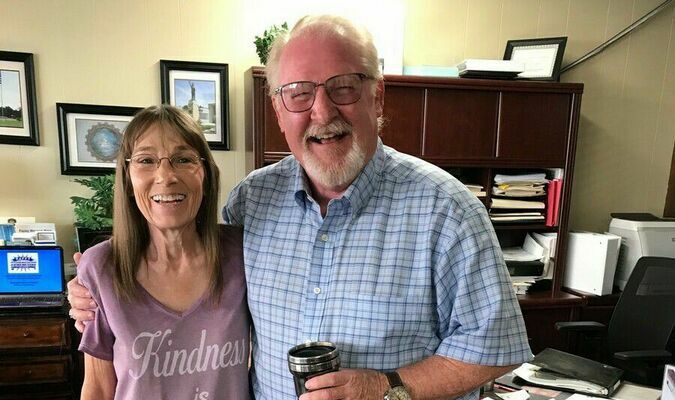 After 28 years of running in the economic and community development world, the Blackwell Industrial and Economic Development Authority announce the retirement of John Robertson, Executive Director, a position held since 2013.

Mr. Robertson first began his career in hotel and restaurant administration after graduating from Oklahoma State University which led him to spending a summer in Hawaii learning the skills and trade of the industry. He worked as the Small Business Management/Self Employment Training Coordinator with the Wes Watkins Technology Center from 1990 to 1997 where he assisted small business owners with employment training and development.

During his time, he also served the Holdenville Chamber of Commerce in various capacities, including chairman and eventually president of the board. Mr. Robertson later moved on to become the Economic Development Specialist for the Oklahoma Department of Commerce. During his tenure with ODOC, he provided vital economic development support while building a wealth of legislative and regional relationships with the communities he served.

This experience led Mr. Robertson to accept a positon as the Director for the Okmulgee Area Development Corporation where he managed until 2012, prior to his arrival in Blackwell.

In March of 2013, the Blackwell Chamber of Commerce and Blackwell Industrial Authority hired Mr. Robertson as Executive Director for both entities as a partnership agreement.

In 2014, Mr. Robertson was awarded the new executive director of the year from the Oklahoma Chamber of Commerce Executives. During his eight-year leadership, he has coordinated and helped to create several new programs ranging from downtown revitalization to tourism events. Mr. Robertson has assisted many businesses in locating and expanding here in Blackwell which have created over 200+ jobs since their inception.

In 2016, the creation of the Blackwell Economic Development Authority was created and added to Mr. Robertson’s leadership which now has a housing development with 14 new homes to be built.

In addition to Mr. Robertson’s service in economic development, he also has extensive experience and long service record on various community and non-profit boards. Mr. Robertson has been a charter member of the Woody Guthrie Coalition, Inc. since 1998, a 501c3 organization that has a regional economic impact $2M+ annually.

As Mr. Robertson embarks on his retirement, the BIA/BEDA salutes him on a stellar career in economic development and thanks him for his contributions to the Blackwell community. John has expressed his excitement of having the extra time to spend with his beautiful wife Sue of 20 years so they can attend school and athletic events for their 16 grandchildren.

He is looking forward to spending quality time with his family and looks forward to future family trips.

Help us Celebrate Mr. John Robertson and wish him well at the Kay Room, a come and go event, December 15th from 1 pm to 3 pm.