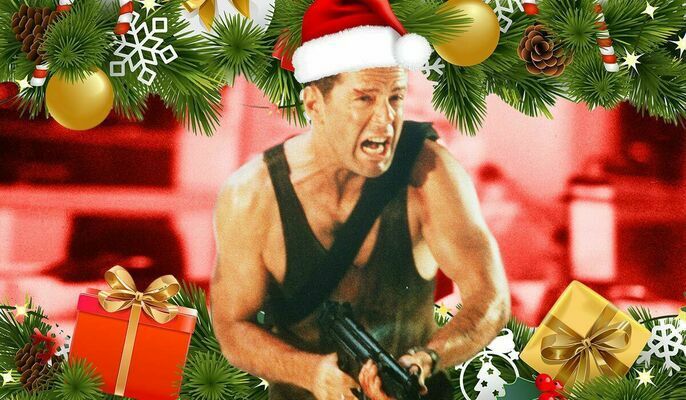 “Mistletoe can be deadly if you eat it.”

“But a kiss can be even deadlier, if you mean it.”

It’s time for some Ho-Ho-Holiday cheer as we officially enter December, and what better way to spend the month of Christmas and holiday merriment than with some good, old-fashioned, Christmas films?

Almost every family I know has some sort of tradition this time a year, whether it’s watching the 24-hour marathon of A CHRISTMAS STORY, popping on National Lampoon’s iconic CHRISTMAS VACATION, shedding a tear to the wholesome entertainment of IT’S A WONDERFUL LIFE, or any other way you and your family choose to celebrate.

Now, let’s get into the nitty-gritty. What really is a “Christmas movie”? There’s a long-running internet meme about John McTiernan’s Bruce Willis action flick DIE HARD being a Christmas movie because it takes place on the Christmas holiday and deals with “Christmas themes” like forgiveness, family, and of course mowing down people with machine guns.

So, is DIE HARD a Christmas movie?

Well that depends on what you consider a “Christmas movie” needs to have. Bruce Willis' reluctant hero John McClaine flies to LA to reconcile with his estranged wife at her office Christmas party, and at the same time he helps a jaded LAPD officer Al Powell come to terms with a tragic shooting that has left him weary on if he's fit to wear the badge. There's a lot of well-written character moments in DIE HARD, aside from the fantastic action and the greatest line in film history...Yippie ki-yaye.

But to the "What is a Christmas movie" argument, I present Tim Burton’s 1992 gothic masterpiece BATMAN RETURNS, which- like DIE HARD- takes place over the Christmas season in Gotham where Batman is pitted against a maniacal toymaker named Maxwell Shrek, the disgusting Penguin, and the alluring Catwoman.

BATMAN RETURNS is a disgusting, depressing, bleak, and yet heart-warming Christmas movie that deals with some very adult concepts like the abandonment of children, the idea of “parental love”, love itself, loss, rebirth, and more. It also has Michelle Pfeiffer in skin-tight leather, but that’s besides the point.

Other “non-traditional” Christmas movies could be argued to include the Mel Gibson/Danny Glover action flick LETHAL WEAPON, the Joe Dante horror feature GREMLINS, and the raunchy Billy Bob Thornton comedy BAD SANTA. All of which are Christmas-set films that might be a bit gorier and perhaps a bit more f-bombs than, say, MIRACLE ON 34th STREET...but they’re Christmas movies none-the-less.

L.A. CONFIDENTIAL, THE GIRL WITH THE DRAGON TATTOO, IRON MAN 3, these are others that exist in that “are they-aren’t they” bubble of Christmasdom that DIE HARD isn’t exactly exclusive to.

Now, of course, there’s your more “friendly” but less-argued affairs like the fist Harry Potter film, the Ryan Reynolds comedy JUST FRIENDS, and even the unexpectedly poignant Leo DiCaprio / Tom Hanks caper CATCH ME IF YOU CAN which features one of my favorite scenes of all time when DiCaprio’s con artist character phones Tom Hanks’ special investigator because...he has no one else to talk to. It’s a sweet moment that defines what the holidays are really all about.

Christmas comedies, of course, might be everyone’s favorite. The Vince Vaughn / Reese Witherspoon feature FOUR CHRISTMASES is a good example of a recent Christmas-comedy, along with wholesome Holiday romances like the Jack Black / Jude Law picture THE HOLIDAY or the recent LAST CHRISTMAS. And who could forget the iconic Arnold flick, JINGLE ALL THE WAY?

Of course, if you want to go into the horror territory (more-so than simply Gremlins) you have 2012’s science fiction odyssey PROMETHEUS which, technically, takes place over the Christmas holidays as well as 2013’s RARE EXPORTS, a Finnish horror-film about a remote mining village on the Russian border than accidentally awakens a grotesque creature that may or may not be the “real” Santa Claus.

So, Christmas movies can be different for everyone. Do you agree that a Christmas movie has to be a strictly family-friendly, warm and fuzzy, feature to be a “Christmas Movie” proper, or are the lines a bit more blurred than that?

What are some of your favorite “Christmas” movies, traditional or not?